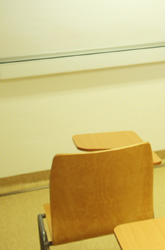 Many adults can recall being on the receiving end of a punitive smack to the backside during their schooling years. But for parents, it may come as a surprise that in-school corporal punishment, or physical punishment inflicted on the body, is still legal in over twenty states, though it's banned in 24 others and outlawed in most of the Western world. The list includes Indiana, Arkansas, Alabama, Colorado, Idaho, Wyoming, Kansas, Kentucky, Mississippi, Arizona, Florida, Georgia, Louisiana, Missouri, New Mexico, North Carolina, Ohio, Oklahoma, Pennsylvania, South Carolina, Tennessee, and Texas.

Though the use of corporal punishment in U.S. schools has been in steady decline over the last 25 years, a recent decision by the Twiggs County School District in central Georgia to reinstate spanking as a method of discouraging misbehavior indicates that old habits may die hard when it comes to school discipline. Ethel Stanley, one of the district's board members, said to reporters that spanking had been in the books for years – it just hadn't been enforced. But some board members felt that alternative punishments just weren't getting the message across to students who misbehaved.

As in many other schools where corporal punishment is practiced, parents will be given a permission slip to sign authorizing the use of paddling or spanking as a disciplinary method for their children. But many critics of corporal punishment say that parental permission isn't enough to justify spanking or paddling in schools. “Teachers have training in child development and learning,” says Nadine Block, Executive Director of the Center for Effective Discipline, an anti-corporal punishment organization. “If anyone in the community should be an example that you don't hit children, it should be them.”

Block points out that, while supporters of spanking in schools cite personal experiences or other anecdotal evidence to defend their views, a long list of opponents to the practice include the American Academy of Child and Adolescent Psychiatry (AACAP), the American Academy of Pediatrics (AAP), and the American Civil Liberties Union (ACLU). “Corporal punishment is of limited effectiveness and has potentially deleterious side effects,” stated the AAP in a policy statement. The AACAP cautions that “Corporal punishment signals to the child that a way to settle interpersonal conflicts is to use physical force and inflict pain. Such children may in turn resort to such behavior themselves. They may also fail to develop trusting, secure relationships with adults and fail to evolve the necessary skills to settle disputes or wield authority in less violent ways.”

Wondering how to spare your child the paddle if your child's school district allows corporal punishment? Here's what you need to know about advocating for your child, and implementing change:

Get caught up on the Code. School districts should have a discipline code available to parents in writing, and you should inform yourself about school policy. In what situations can a child be paddled? What is the maximum number of paddle strokes permitted under your state law?

State your case. Be sure to write a letter to your school administrator stating whether you grant your permission for the school to use corporal punishment towards your child or not, and indicate that you are willing to work with the school on alternative disciplinary strategies. “Parents need to make sure that they're available to be a support to the school, and show that they want to be involved,” says Block.

Keep a record. If your child is paddled or spanked at school, and you are against the practice or if your child is injured, make sure to document exactly what happened. If necessary, take color photographs of your child's injuries and/or take him to a doctor to be examined. Search out witnesses who might be able to tell you exactly what happened, and keep a log of who you contact and what you find out about the incident.

If your school district allows corporal punishment, and you want to change the law, Block suggests taking the following steps:

July 31, 2008
Next Article: Assessment Literacy in Today’s Classroom
We enable strictly necessary cookies to give you the best possible experience on Education.com.Cookie policy