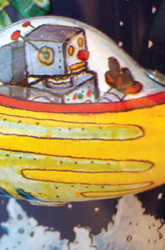 Whatever happened to the good old days when TV heroes lived on space stations, literary families found wrinkles in time and our children's imaginations soared? Today's heroes tend to be more Spandex than space and more drama than dramatic. Living in a reality TV world makes it difficult for our children to see past the everyday workings of the world and to see the problems that need solutions. The solution to this problem? Raising sci-fi kids!

You don't need to buy stock in aluminum foil or start building a jetpack in your basement to raise Sci-Fi kids, and you certainly needn't expect your children to solve all the world's problems. But, by introducing them to a literary genre in which writers have consistently sought out unique answers to seemingly unsolvable issues, you can open up their minds and teach them the power of innovation.

"In order to survive and even thrive in a science-fiction world we need to think science-fictionally," says James Gunn, professor at the University of Kansas, science fiction author and director of the Center for the Study of Science Fiction. "Which means," he continues, "to consider the impact on the future of current actions and policies, to contemplate alternative possibilities, to prepare ourselves to learn in a changing world--not simply master contemporary skills--and to realize that the one true thing one can say about the present is that it will be different."

Why does Gunn think we live in a science-fiction world? He points out that, like in many Sci-Fi books and movies, we are living on a planet with a quickly-changing climate and which is running low on resources, including fuel, unpolluted air and agriculturally-usable land. Sure, it sounds grim, but Gunn also points out that thinking "science-fictionally" has more than once changed the scope of the world and encouraged scientists to create or explore solutions once thought impossible. Take for example, the helicopter and the first expedition to the South Pole. Both of these amazing feats were credited to ideas inspired by reading the science-fiction of Jules Verne.

Want to encourage your child to think science-fictionally? Here are some classic Sci-Fi books to inspire your budding scientific inventor:

With your help, your Sci-Fi kid can see the world through different eyes, asking not "What happened here?" but "What could happen here?", "What effect will it have?" and "What else could the characters do?" While reading science-fiction with your child doesn't ensure his ability to change the world, it can help change the way he thinks about the world, expand his dreams of the future and give him the inspiration to pursue those dreams, however far-fetched they may seem. After all, as Ray Bradbury once said, "Anything you dream is fiction, and anything you accomplish is science, the whole history of mankind is nothing but science fiction."