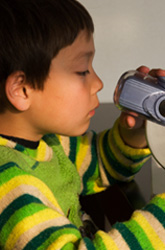 Traditionally, elementary school means the three Rs: reading, ‘riting, and ‘rithmetic. That tradition has been carried on by No Child Left Behind, which holds schools accountable for scores in reading and writing, leaving science on the back burner. But, that may be about to change. States are now required to test students annually in science for grades 3-5, 6-9 and 10-12. Though the penalties for low test scores in science aren't nearly as stiff for those in math and reading, some say this is an indication that the tide is turning.

And it’s about time, says Harold Pratt, a retired science coordinator, the former president of the National Science Teachers Association (NSTA) and current President of Science Curriculum Incorporated. “People say, ‘you can’t do science unless you know how to read and write.’ Actually, you can learn to read and write by doing science, but that’s not well understood,” Pratt says. “In science, you learn about the process of going from evidence to observation to conclusion. You don’t have that kind of thinking in other subjects and it’s critical to early learning,” he points out.

Pratt says if we want more students to consider science-based careers after graduation, we have to get them hooked in the younger grades. “On the attitude side, you’ve got to get kids interested in science somewhere before the sixth or seventh grade,” he says.

Science activities in the early grades are what lay the groundwork for student understanding in the subject, and we’re talking hands-on lab experiments, not just reading dull textbooks. The NSTA says hands-on investigation through laboratory experimentation is the best way to introduce students to scientific inquiry, the process of asking questions and conducting experiments as a way to understand the natural world, which is the foundation of science education.

But laboratory instruction or “lab” isn’t just about beakers and Bunsen burners. A “lab” can be in the classroom, at home, or out in the field—anywhere that provides students with the opportunity to interact directly with natural phenomena or with raw data. These labs allow students to design investigations, engage in scientific reasoning, manipulate equipment, record data, analyze results, and discuss their findings. The NSTA says that “While reading about science, using computer simulations, and observing teacher demonstrations may be valuable, they are not a substitute for laboratory investigations by students.”

Not only is it a better way to learn science, but it’s also more fun. “Kids love laboratories,” Pratt says. “They’re concrete thinkers, and they love to tinker with things, manipulate things, watch things that move, and things that change.”

What are some of the typical science experiments conducted in elementary classrooms around the country? Pratt offers a short list:

Want to supplement your child’s science education with an experiment at home? Check out this fun science experiment from Smash It, Crash It, Launch It: 50 Mind-Blowing, Eye-Popping Science Experiments by Rain Newcomb and Bobby Mercer:

Fettuccine Bridge is Falling Down

Build an incredibly strong bridge with 20 pieces of pasta. Then try to destroy it.

What You Need:
What You Do:
Step 1 You’re going to build the strongest bridge possible using only 20 pieces of pasta. Here are the ground rules for this challenge. You can cut the pasta into any size pieces that you want. Your bridge should be able to hold a toy car at least 1 inch off the tabletop and, like a regular bridge, should have an opening underneath to drive the toy car under.
Step 2 Glue or tape your pasta bridge together. If you use glue, let it dry completely before you test the bridge.
Step 3 Now for the fun pat! Slowly put one book at a time on top of the bridge until it smashes.
Step 4 Try another design and see if you can make a stronger bridge. Challenge your friends to see who can build the strongest one.
What’s Going On?

Bridge design is about strength and the amount of material you use. You probably found out that trusses work the best. Trusses are the triangular parts of the bridge. Triangles are often used in building because they spread out the force (the weight of the books). Gravity pulls the books straight down. The triangles redirect that vertical force, spreading it out horizontally. This distributes the force of the weight more evenly over the supports of the bridge, allowing you to make a stronger bridge using less material. As you walk around your town, take a look at the supports on bridges. See if you can find better ways to build our bridge.

Next Article: What Dinosaur Discovery Can Teach Your Child
We enable strictly necessary cookies to give you the best possible experience on Education.com.Cookie policy