Log in with different email
For more assistance contact customer service
School and Academics
Education Issues Today
Is Your Child Being Taught From a Script?

Is Your Child Being Taught From a Script? 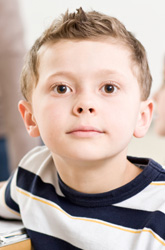 Being a teacher has always had a lot in common with being a performer. Like actors, teachers are up in front of a crowd, they have to entertain an audience, and they can't let their energy flag for a moment. These days, there's another trait some teachers share with professional actors: the words they're speaking are coming from a script.

If your child's teacher is using an increasingly common system of instruction known as "scripted teaching," he isn't just following lesson plans that take the form of simple outlines. Instead, he's using a series of tightly worded scripts that tell him exactly how to explain concepts, ask questions, and respond to students' answers.

Scripted teaching is intended to standardize instruction across classrooms and eliminate the risk of poor instruction by teachers who aren't as experienced or haven't received as much training as others in their field. While scripts are especially common in reading classrooms (popular scripted reading programs include Success For All, Open Court, and Direct Instruction), they're also popping up in other subject areas. More and more school districts are now using scripted math curricula, for example.

The rationale behind scripted teaching makes sense to a lot of people. Advocates argue that we already have a body of research-based instructional techniques that have been shown to be effective at improving student achievement. In an ideal world, we'd train every teacher to apply these practices in their classrooms. But since that kind of professional development is extremely expensive, packaging up the pedagogy itself in the form of a scripted curriculum is a cheaper option. With the federal government's Reading First program providing millions of dollars worth of funding to schools that use "proven" methods of reading instruction, scripted teaching is becoming attractive to districts struggling with financial difficulties.

So does it work? The truth is that research results evaluating the effectiveness of scripted teaching are mixed. Some classroom studies have found that teachers who use scripts are no more effective than those who use traditional instruction. Other evaluations—such as a 2002 study that followed at-risk students in Florida, Maryland, and Texas—show that programs including scripted teaching actually help to raise reading levels significantly.

John Spencer is a teacher at Borman Middle School in Phoenix, Arizona, part of the Carwright School District. He was asked to use a scripted curriculum to teach an English Language Development class. There were some things about the curriculum that Spencer liked, such as the fact that the lessons were based on principles derived from reading research. He also says that it was full of "great ideas."

But in the end, Spencer says, "It was clever marketing, really. The district presented it as a time-saving device, as if being 'teacher-proof' was a good thing. Yet most teachers I know would rather have academic freedom and the opportunity to teach to the student than save a few hours a week and feel like a McDonald's burger-flipper."

Ultimately, Spencer didn't want to abandon his personal style in favor of an all-or-nothing alternative based on words someone else had written. And without anyone monitoring him, he saw no reason to continue using the scripted curriculum. Instead, Spencer did his own research into best practices in English Language Development, created instruction tailored to the students in his class, and abandoned the script.

Still, Spencer is no first-year teacher. He's an experienced educator who is used to taking charge. It takes time to develop that much confidence. It's possible that having a structured script to rely on could help a younger teacher achieve that level of skill and assurance.

Curious if your child's school is weaving in some scripts themselves? If you don't already have this information, talk to the teachers and administrators to find out more about the curricula they're using. Above all, keep an open mind. Ask about how the programs were chosen, and about the school's experience with them so far. Finally, consider sitting in on a class to see teachers in action. Script or no script, it's not hard to see when kids are genuinely alert, engaged, and learning.

Next Article: Is America Failing Math?
We enable strictly necessary cookies to give you the best possible experience on Education.com.Cookie policy