Log in with different email
For more assistance contact customer service
Learning and Your Child
Behavior Issues in Children and Adolescents
Sensory Processing Disorder: Is Your Child "Out of Sync"?

Sensory Processing Disorder: Is Your Child "Out of Sync"? 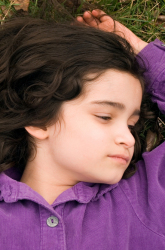 Things aren’t looking so bright today at Sunshine Preschool. Four-year old George careened off the play structure again, not even realizing he was falling until he hit the sand. Then he stomped in a puddle. Now, covered with mud, he can’t stop bashing into the children in front of him. When he reaches the sink to wash hands for snack, he turns the faucet full blast, splashing water onto the floor. Crouched in a corner, Jennifer starts to scream. She was already worried about the crackers at the snack table, which will make her gag if they aren’t just the right texture. And now some water might hit her shoes!

Another regular day in preschool? First week, maybe. But this is mid-year, when most kids have settled into their routines. And yet George and Jennifer each seem to find every day an uphill climb. And that’s true at home, too.

What’s going on? Different as they may seem, George and Jennifer are both showing signs of a condition called “Sensory Processing Disorder.” Both kids can hear, see, touch, smell and taste, but they have big problems putting it all together. Jennifer is so oversensitive that she even cringes when teachers try to give a reassuring hug. George, on the other hand, can’t get enough touching, and his wild crashes show difficulty with what specialists call the “propriocentric” sense (necessary for muscle coordination and body position) and the “vestibular” sense (necessary for balance, posture, and the body’s orientation in space).

Some kids will outgrow these early tendencies. But all too often, say experts, they don’t. And Sensory Processing Disorder can cause painful delays in school. As Carol Stock Kranowitz, author of The Out-of-Sync Child, put it, “If the body is not cooperating, then academics are definitely going to suffer.” Still, she says, there’s good news: occupational therapists have a range of effective techniques to help with SPD, and especially when it’s caught early, substantially progress can be made.

So if you think you’ve got a George or Jennifer, what should you do? Kranowitz recommends two practical questions:

For parent and SPD advocate Laurie Renke, intervention made all the difference. At four, her son was misdiagnosed with a host of ailments from Attention Deficit Disorder to Obsessive Compulsive Disorder. “Once we received the proper diagnosis of sensory processing disorder,” she says, everything shifted. “Because of occupational therapy and my education on how my son’s body perceived the world around him,” she says, “today, at 13, my son is a different person. The prognosis for his education, social, and emotional well-being has completely changed from grim to amazing.”

Next Article: Mississippi State Disability Resources
We enable strictly necessary cookies to give you the best possible experience on Education.com.Cookie policy