Log in with different email
For more assistance contact customer service
Parenting and Families
Talking About Sexuality
Sex Ed 101: What Your Child May Not Be Learning in School

Sex Ed 101: What Your Child May Not Be Learning in School 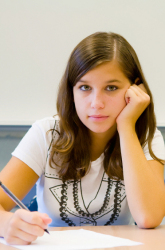 Collect This Article
3.7 based on 9 ratings
by Education.com

Talking about the birds and the bees has always been a challenge for parents. It's hard to know when to approach kids, how to talk to them about the issues that matter, or even why it's so important in the first place. But sex education isn't just an issue at home: it has become a hot-button controversy among politicians, pediatricians, and educators nationwide. What's the basis for the debate? Whether kids should get the details on sexual relationships, or whether abstinence is truly the best policy.

Abstinence-only education stresses a “no sex before marriage” message, and avoids addressing safe sex and birth control methods in the hopes of curtailing sexual activity among teens. “If we look at the risk behaviors that youth are engaging in,” says Valerie Huber, Executive Director of the National Abstinence Education Association, “avoiding that risk altogether is only possible if youth abstain.” Although the moral and religious implications of the program have some up in arms, Huber advises parents to decide for themselves. “There's an awful lot of misinformation about what abstinence education actually is,” she says, such as the view that abstinence education is religious indoctrination or fear-based conditioning. “It's really important for parents to learn and be aware of the content of the curricula, and not just go by sound-bites of how abstinence education is depicted in the media.”

In contrast with abstinence-only education, "comprehensive" sex education addresses practical issues of sexual protection, such as how STDs are transmitted, how to use a condom, and how to acquire contraception. However, what constitutes the core Sex Ed. curriculum is sometimes unclear, and some experts believe that sexual education classes can be taught by underqualified instructors, or teachers who forgo truly comprehensive instruction to avoid controversy. "There are few states requiring teachers to have very much training in sexual education," explains David Landry of the Guttmacher Institute, a research institute specializing in sexual and reproductive health education and policy. This explains why the definition of Sex Ed. can range from an ongoing class facilitated by a trained health teacher, to the school's football coach sticking The Miracle of Life video in the VCR and retreating to a corner.

Although abstinence-only education, comprehensive sexual education, and what's been dubbed "abstinence-lite" (a reluctant combination of the two) are all in practice, it's hard to get past the controversy and see which approach has been most successful. There have been a slew of studies completed, but many have an agenda beyond scientific inquiry, and most contradict one another. While it's hard to tell what works on a national level, however, you can find out what's going on in your child's classroom. Parents should be sure to ask what their child is learning in Sex Ed. and how they are being taught, so they can determine for themselves what's being covered and what's being left out.

There's one thing, however, that both abstinence-only and comprehensive sex education proponents agree on: parents should be the cornerstone of their children's sexual education. "It's important that parents know they are really the most important sex educator, and they need to realize that their teens are listening, whether or not they're talking," says Huber. Landry agrees: "It's very important to talk to your kids—it's likely that even good programs do not offer enough."

So, don't count on schools to get your child the message you want them to hear. No matter how you approach the topic of sex at home, just do it. Though your child may squirm now, she will thank you later.

Next Article: Body Talk: What Preschoolers Need to Know
We enable strictly necessary cookies to give you the best possible experience on Education.com.Cookie policy