Finding the Spark in Creative Writing 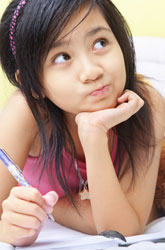 It’s no secret: creative writing is challenging. While older writers have picked up techniques over time to jumpstart the creative process and combat bouts of writer’s block, kids lack the firsthand experience and a well of tools to propel them into a world of imagination. How, then, can you help spark your child’s creative inner flame?

“In my experience, I find that students get stuck because they don't have a ton of experiences and reflective reference points in their lives yet,” says Barbara Whitlock, a teacher of online classes. While accumulating these life encounters takes time, there are ways, in the meantime, to encourage kids to experience the world around them and infuse what they see into their writing. Here are some ideas from teachers and writers to help spark the imagination.

Ultimately, experiences and experiments are key to unleashing your child’s creativity. “Encourage them to live life. Life experiences are the best source of material,” says George F. Franks III, a consultant, coach, and mentor in Maryland. “Meet lots of different people. Travel to new and different places. Get out of your comfort zone. And write, write, write.”