Log in with different email
For more assistance contact customer service
Outside the Classroom
Camping, Hiking, & Family Outdoors
It's Spring: Get Outdoors!

It's Spring: Get Outdoors! 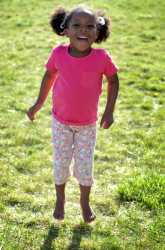 It's officially Spring. The birds are singing, the bees are buzzing, the air is warm and fresh, and the flower bulbs you planted last fall are beginning to poke through the ground. And the kids are – where?

In too many cases they are inside, glued to a TV or computer screen. In today's technologically-charged society, many kids who can recite entire scripts from their favorite shows are unlikely to know that pine cones come from pine trees. In fact, according to the Sierra Club, children today spend less time playing outdoors than any previous generation. Why is this? Well, part of it is that children's "free time" – which used to be spent in unstructured play activity - has declined a whopping 9 hours per week over the past 25 years.

And numbers show that the unstructured play activity that they do have is spent indoors. Consider this: almost 50% of four-to-six year olds have TVs in their bedrooms, and kids between the ages of 8 and 18 spend an average of 6.5 hours per day with electronic media. Alan Gass, MD, an Advisory Board member for Healthcorps (www.hcstaging.com), an organization which works to educate kids in forming healthy habits, notes, "Now, everything's electronic; there's a pull in the other direction. There's really no value in the chatting, being on the internet, watching TV - there's really zero value in that."

At a time when child obesity rates are rising quickly, and with it associated problems like diabetes, heart disease and others, there's more reason than ever to turn off the TV, embrace the warm weather and get the kids outside to play.

The benefits of outdoor play are many. Besides the physical benefit of better health and fitness, experts cite behavioral and even academic benefits derived when kids spend a healthy dose of time outside having fun. Michael Casaus, the New Mexico Youth Representative for Sierra Club's "Building Bridges to the Outdoors'" program, says "We can cite studies that have been done that show that kids who go through outdoor education programs improve science scores by 27 percent. Grade point averages go up, kids behave better in the classroom - there are real tangible benefits." In contrast, the medical journal Pediatrics has linked a child's "screen time" with increased rates of obesity as well as Attention Deficit Disorder (ADD), while contact with the natural world has been shown to reduce both problems.

How can parents encourage reluctant kids to get outside? Here are a few ideas:

Next Article: Want Your Kid to Ace the SAT? Advice from Someone Who's Taken it 25 Times!
We enable strictly necessary cookies to give you the best possible experience on Education.com.Cookie policy