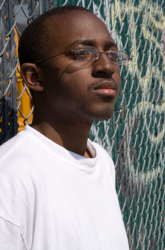 Sure, your teen may have an attitude, and yes, he may be obnoxious when he treks through the mall in a pack of iPod-toting pals. Good thing, then, that the spunk in his chat room and lunch table persona can also be found in his literary voice on paper.

Consider a crew of teens at the Sunset Neighborhood Beacon Center in San Francisco, who share prose and poetry at Bamboozled.org. In Kyle’s review on Stephen King’s “comical and insulting” On Writing, for instance, he describes how the master of horror “administers a slap of reality” to aspiring writers. Kyle wields and wisely employs the raw power of nouns, verbs, and adjectives.

Or take a review of a Nine Inch Nails show, in which Toma writes, “And there, on the stage, amidst the synthetic smoke and flashing lights, stood the man behind the music: Trent Reznor, screaming from the pulpit like some arcane cleric of emotionally charged hedonism.” Sounds like Toma may be following the footsteps of music journalists whipping up in-your-face language at Spin.

These days, the pool of writers penning fierce and vivid language is vast and deep, from Gen Xers and Twixters versed in numerous strains of slang – from iSpeak to the underground vernacular of various music scenes – to talented teens like those at Bamboozled, whose affinity for such writing may be innate.

“If you want a glimpse of today’s punchy writing, read reviews of books, movies, music, and restaurants in major newspapers and popular magazines,” says Arthur Plotnik, author of Spunk & Bite. “Because reviewers must describe the same types of faults and virtues each time, they’re forced to find inventive language for the task – and say a lot in a short space.” He’s right: Consume the online content of WireTap’s young, urban, and socially conscious journalists, or scan the digital diction of Wired magazine’s glossy pages, and you’ll read the words of edgier, media-savvy generations.

So how can today's teens infuse that extra edge into each of their sentences? Here are Plotnik's tips:

Write heroic epics in mythical settings if you must, coughing up phlegmy names like Gnarthule and Morlaicgh to perform your evil. But in your evolution as a writer, consider skipping this imitative stage. A troubled anti-hero in your own world, someone with a name like Gary or Marcie, might lead you to more original writing and discovery.

Take this vow: "The next time I describe something out of the ordinary, I will not use the worn-out terms awesome, amazing, unbelievable, incredible or mind-boggling.” Refresh readers from such everyday droning. Find fresh new words and figures of speech that make writing distinctive, stimulating, and scorching.

(A note on figures of speech: Literary devices honed in middle school – metaphors, alliteration, similes, and personification – are effective. But your teen can take stabs at other techniques:

Oxymorons: Pair words to create contradictory (yet delightful) phrases, such as “quietly obnoxious” or “aging yuppie”

Neologisms: Invent terms or phrases to fuse pre-existing concepts by combining parts of words, like “cancakes,” which describes the organic pancake batter now sold in aerosol cans, or “slackademic,” which refers to a student prolonging school to avoid adulthood

Swearing and obscenities may be all around us, but it doesn't have to be mimicked bleep by bleep when writing emphatically and realistically. The more sparingly that shocking words are used, the more shock value they have. For example, such words rarely appear in The Road, Cormac McCarthy's recent novel about the end of the world. In his pages, the world's destruction is so obscene that obscenities don't have to underscore it.

Even when writing the dialogue of profane characters, less is more. Power comes from words in a situation of turmoil – words arising out of sadness, frustration, or rage. Is any obscenity stronger than "I hate you"?

Language matters. It will matter as long as people use words to symbolize everything that moves them. As a writer, you’ll soar above the crowd or be lost in it depending on the power and inventiveness of your language.

Words must be your hobby. Not so much fancy words, but crisp, surprising words, funky words, slang, and words borrowed from various subcultures, special fields, and world languages. When you come upon expressive words or words used in a new way, note them in your journal. Use them as soon as you can. And stop using them when everyone else has worn them out.

(A note on references: In addition to a handy thesaurus and dictionary, which should always be on your desk, flip through books like Lynne Truss’ Eats, Shoots & Leaves or Patricia T. O'Conner’s Woe Is I: The Grammarphobe's Guide to Better English in Plain English, which are both chatty, lighthearted guides that prove punctuation and grammar lessons don’t have to be brutal.)

For writers, the Web is cool, but the library is magic, not only when browsing the shelves, but for inspiration almost anywhere you wander in the stacks. Ask any successful writer: chances are the library – and its writer-loving librarians – helped set them on their paths.

At some point in your literary life, you’ll want to write your "coming-of-age" story, or thoughts on how you started coming to terms with the world. Why wait until you've forgotten what it was like? Try it now, when you know the lingo of your crowd and the icons of your time. You can be funny, as no one is funnier than teens. You know the joys of being your age. You know the cruelties and heartaches, and how, when you confront them, you come of age one dry tear at a time.

Do you have a perspective on your life, some distance to judge it by? Probably not. But writing is the beginning of that perspective, a gift in itself. To find it, you don't have to write a whole novel or even fiction. Just pick a theme or subject you feel strongly about, and use that as the takeoff point for every jive and loopy feeling you want to express, every event or relationship you want to relate – all in your own most energetic, entertaining language.

Of course, your teen can be inspired by anything she reads: engaging young adult fiction, smart blogging, hip reviews, and even advertising copy. However, her own ideas and emotions may be the strongest inspiration of all.