The Need for Speed: Sweet 16 and Safe Driving 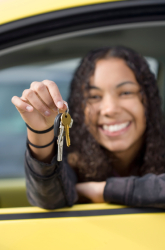 Getting a driver’s license is a teen rite of passage. Staying up late pacing while waiting to hear the car pull into the driveway is the parental counterpart. You’re right to worry; auto accidents are the leading cause of death for American teenagers. Over 3,800 teens between 15-20 are killed every year in the United States, and over 326,000 are injured. While you’ll probably never stop pacing the living room, there are steps you can take to make your teen safer behind the wheel.

Why should you bother with these restrictive and inconvenient rules? Licensed 16-year-olds don’t only have less experience than older drivers, they’re also more prone to risk taking, more vulnerable to peer pressure, and, in their minds, immortal. For these reasons, they’re more than twice as likely to be involved in fatal collisions as everyone else. Don’t let your child become a statistic.

Next Article: Is Your Teen Getting Enough Sleep?
We enable strictly necessary cookies to give you the best possible experience on Education.com.Cookie policy