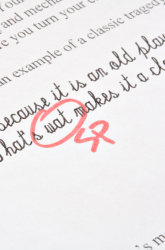 Your child has an essay splattered with red scribbles. What do they mean? Many comments from a teacher, like “writing is illegible” or “sentence is a run-on,” are straightforward. Feedback on your child’s ideas, however, may be less clear. It’s beneficial, then, to learn to interpret a teacher’s notes to help your child identify what areas need improvement. Here’s a sampling of frequent feedback, particularly for an expository paper, personal narrative, persuasive essay, or short story:

Tips: In an expository essay, explain every important idea with details. Never assume the reader knows about the topic or the book.

Tips: In a short story, a personal narrative, or reflective piece on a childhood event, evoke smells, tastes, and sounds. Transport the reader to an entire world of your creation, or from your memory. You are the expert.

Tips: In a research paper or argumentative essay, spread out numbers or statistics. Cite the most significant ones, and then describe, in your own words, why they support your argument.

Tips: In the editing stage, read each sentence and ask: Does this prove my thesis? Expository writing also requires a balance of exposition (description from the text) and analysis (dissection of this text).

Tips: “Don’t just summarize what happened to you. Think about the significance of each step and consciously craft your essay,” says Hamlin. Consider two “voices” for such an assignment: the voice of your former self – curious and perhaps naïve – and the current one pondering the past, which may be more mature.

Tips: When analyzing a book, ask yourself: How did the main character change? What did he or she learn? What larger opposing forces -- aside from human characters -- hinder the protagonist from reaching a goal? When crafting a personal narrative, questions are similar: What does this event say about who I am?  How has it affected my life?

Tips: Read work aloud. Pay attention to where periods are placed, and pause at each one to figure out if an idea can be better connected to the next. Use transitions such as “next” and “however,” or phrases like “in the second example” or “on the other hand.” But don’t go overboard: The key is to sound natural. Creating varied sentence beginnings may be an advanced task, but it’s never too early to practice.

Tips: Every character, even a “good guy,” has flaws. “Show personality contradictions and quirks,” says Hamlin. “Vivid physical description will also help round the character out and make the person more believable.”

Tips: Envision yourself on a stage during a debate. How does the person – or group – behind the opposite podium refute your argument? What will you respond?

It may take practice learning to decode a teacher's comments, but the more you review your child's work, the more you'll be able to assist her with revisions and future assignments.