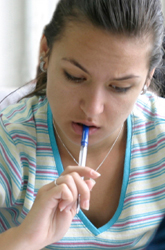 Early last month the results of the National Assessment of Educational Progress (NEAP) were released, and they held relatively good news. Despite opinions to the contrary, our chat-enabled, Internet-savvy, IM-happy teens are continuing to master the “basic” writing skills they needed to coherently convey information (without acronyms or emoticons!). In fact, the average score on the writing component of the assessment has increased for both 8th and 12th graders since the last exam was given in 2002, indicating that more students are grasping the essentials of writing.

"Good writing means you can tell a story, provide information and persuade people with your words," says Mark Schneider, Commissioner of the National Center for Education Statistics. Schneider acknowledged that we still need to make progress, but that students are getting better at mastering the basics. In fact, not only did the average score increase by 3 points for 8th graders and 5 points for 12th graders, but approximately 85 percent of all students performed "at or above" the Basic level.

Students in 45 states and across two grade levels participated in the NAEP Writing Framework assessment, for which the questions and scoring rubrics are developed by the National Assessment Governing Board. Both 8th and 12th graders were assessed on their ability to use writing in three different ways: for narrative, informative and persuasive purposes. Students who take the exam are divided into three levels - Basic, Proficient and Advanced - based on their scores on a 300-point scale and the coherence and cohesiveness of their writing samples.

What exactly does this mean? Taking a closer look at the National Assessment Governing Board's Achievement Level descriptions sheds some light. Below are the requirements for 8th graders, as outlined in the Writing Framework and Specifications for the 2007 National Assessment of Educational Progress. For 12th graders, the ante is upped; mastering Basic skills is akin to the Proficient skills of an 8th grader, while Proficient is essentially the younger grade's Advanced level.

At first glance, having nearly three-fourths of students acquire Basic writing skills seems like a coup, but some question whether that's good enough, when, in his own statement, Schneider commented, "Ultimately, the goal is to have all students performing at or above the Proficient level."   Clearly that's not happening. Only one-third of all 8th graders and one-fourth of all 12th graders demonstrated Proficiency--a percentage that hasn't changed significantly since the last administration of the NAEP. There also continue to be significant gaps in scores between genders and socio-economic groups. On average, girls tend to score a full 20 points higher than boys, and students who qualify for free lunch have an average 25 points less than their non-eligible counterparts.

While it's encouraging to know that America's students are continuing to learn effective written communication skills, according to Kati Haycock, President of The Education Trust, the increases are encouraging, but not encouraging enough. In a press release, she noted, "In a world that gets smaller, more competitive and more diverse every day, Basic just doesn’t cut it. It doesn’t get kids where they need to go, and it doesn’t get our country where we need go."

In the end, though, students are showing improvement in an academic arena many fear is being overtaken by an electronic world. Proof that contradicts that fear is, in itself, encouraging.