A Teen's Guide to Election Coverage 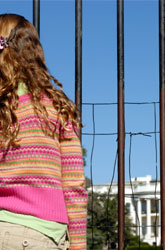 With the presidential election right around the corner, we are being bombarded more than ever with the facts and figures of the race. Sifting through the information is a constant struggle, and it's no different for your teen, for whom these issues are just as pressing. Even if your child isn't old enough to vote, he's old enough to learn about politics in the media. Below is a cheat sheet to help your teen learn the ins and outs, including how to identify bias, how to read the media, and ways to view political satire.

The first thing your teen needs to understand is that every media organization provides a lens through which to view the cold hard facts. Unfortunately, these lens often skew the truth. Jay Rosen at the Center for Media Literacy writes, “We ask journalists to be objective, to be fair, to remain detached.” This isn’t always the case. “Bias” is a personal judgment: an instance of prejudice or tendency to favor a certain outlook.

Two words we hear nonstop in politics normally refer to direction: “left” and “right.” A TV network may be labeled “far to the right,” which means it presents conservative views. A newspaper may be dubbed “left-wing,” meaning it favors liberal perspectives. “Spin” also takes on new meaning: to spin is to manipulate facts or events to promote one’s agenda or discredit an opponent.

Another new term may be “watchdog organizations," which monitor the accuracy of journalists. But, even watchdogs can be "partisan" or connected to a political party. The conservative Media Research Center “exposes liberal media bias,” for example, while Media Matters for America “monitors conservative misinformation.” Some “nonpartisan" organizations, like FactCheck.org, examine the accuracy of candidates’ statements. It targeted a McCain ad that distorted Obama's remark on Afghanistan, for instance, but also red-flagged an Obama ad for misrepresenting McCain’s Social Security plan.

Sound confusing? Well, after you study the types of media, you will identify bias and make judgments on what you read, see, and hear.

“Media” refers to the forms in which information is “disseminated” or spread. Each has a distinct audience. Newscasts, publications, and websites report the same stories, but analysis on CNN may be different from FOX News, or headlines online at The Huffington Post may differ from links on BillOReilly.com.

Take the boob tube, for example – a fitting medium for audiovisual thinkers. The Big Three networks – ABC, CBS, and NBC – have a general audience, while networks like MTV or Oxygen have specific viewers.  “Sound bites,” or brief catchphrases, abound on TV, like “Drill, baby, drill,” or “You can put lipstick on a pig – it’s still a pig.” Such sayings, accompanied by images from debates and rallies, are ingrained in your head.

Exercise: Analyze a candidate’s televised performance. What are their “talking points,” or phrases they repeat? Does this person act like a fatherly or maternal figure? How does he or she project leadership, respect, or warmth? Does body language indicate something different from what he or she says?

Newspapers like the New York Post, alternative weeklies like the San Francisco Bay Guardian, and genre-specific magazines create content for their “demographic,” or segment or age group of the population. (Your favorite musician may pen his opinion in Spin, while tech-focused Wired may run a feature on Facebook election applications.)

Many young readers believe that established publications don’t make errors. But professional journalists make mistakes! “Good journalists and organizations are open to criticism,” writes Bob Steele at the Poynter Institute. Journalists strive for truth, but it’s our job to keep them in check.

Exercise: At a bookstore, gather newspapers, like the Chicago Tribune or the Arizona Republic, and assorted magazines such as Newsweek and Adbusters. Locate letters to the editor, usually at the front. Read reader responses, as well as corrections the editors have noted.

The web encourages immediate user interaction, from submitting newsworthy articles to Digg, rating headlines on news aggregators like The Daily Beast, and connecting with candidates on MySpace and Facebook. (At this writing, McCain had 570,646 Facebook supporters, while Obama had 2,064,967.) The debates have been Twittered live, which means Twitter users sent messages to their virtual networks during a debate. The Media Awareness Network says candidates are forced to say one-liners easily captured in “tweets,” Facebook status updates, and news feed headlines to be memorable.

Exercise: Follow sites that aggregate or gather content, like the ones above, as well as Real Clear Politics or MTV’s Think. Compare the news “fed” daily onto sites, and from which sources they originate. Do your findings suggest anything about the site’s users? Another activity requires a search engine like Google. Think of a sound bite overplayed during campaign season, such as “change is coming” or “team of mavericks.” Google it and examine the results: Is the sound bite used in the same context each time?

As you read and watch more news, you learn to evaluate information. Here are tips:

In politically uncertain times, we turn to humor for laughs and refreshing perspectives. You are probably familiar with Tina Fey’s portrayal of Sarah Palin on Saturday Night Live, as well as Stephen Colbert’s false-conservative show, The Colbert Report, on Comedy Central. News satire like The Colbert Report and The Daily Show is considered “fake news,” but very powerful.

“The Daily Show is probably more reliable for news than anything on TV except PBS,” writes Barry McKernan, an instructor at Manhattan Community College. “It unspins the news.” Also check out The Onion, which covers the election at “War for the White House”; New Yorker cartoons, which make you think; and America: A Citizen’s Guide to Democracy Inaction, an amusing but insightful mock history textbook. Satire relies on “deadpan” or dry humor – don’t mistake it for real news! When in doubt, Google the organization. (Its Wikipedia page may serve as a starting point for research, but don’t rely solely on it.)

Phew, that’s a lot of information. Our best advice is to help your teen filter and reflect on everything she reads, sees, and hears, which will prepare her for the big event November 4.

Next Article: Outer Space Activities - At Home!
We enable strictly necessary cookies to give you the best possible experience on Education.com.Cookie policy