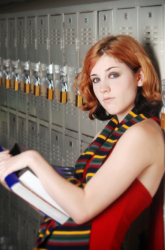 Every parent wants to believe that their teen can make ethical decisions. Sure, there might be some fibbing here and there, maybe an experimental phase of shoplifting or a few suspicious test results. But fundamentally, our kids know the difference between right and wrong. Right?

According to a new survey of teens, it may not be quite so simple. Junior Achievement, a nonprofit dedicated to preparing young people to succeed in the global economy, asked 725 teens whether they felt prepared to make ethical decisions, and then quizzed them about a variety of situations including lying, cheating, and stealing. “The key thing that we found is that the majority of teens are saying that they have confidence in their ethical decision-making capabilities, but in juxtaposition to that, many of them believe that lying, cheating, plagiarizing, and behaving violently are necessary in some instances to succeed,” says Cynthia Hofmann, communications director for Junior Achievement Worldwide. “Along those same lines, they show a willingness to rationalize specific unethical decisions.” In short, the kids in this study think some things can be “wrong,” but can also be okay given the right circumstances.

But is this such as bad thing? Richard Lerner, PhD, Director of the Institute for Applied Research in Youth Development at Tufts University, cautions against taking this as evidence of “the moral hypocrisy of youth.” Sometimes, he says, things just can't be set in black and white, right or wrong terms. “For instance, is violence defined as bullying another person, as premeditated murder, as physical assault, or as defending oneself against an intruder into one's home or defending one's nation in time of war? Some of these instances of violence would not be seen by many people as inappropriate; other instances might be seen as justifiable.” Says Lerner, “The relations here are more subtle, nuanced and complicated than you might perceive them to be at first glance.”

In fact, only 21 percent of teens surveyed indicated that behaving violently towards another person was “sometimes” acceptable, with 28 percent believing the same about illegally downloading music, and 52 percent saying that lying to a parent or guardian was sometimes alright. But among that 21 percent, one fifth of teens said that “revenge” was an acceptable justification for violence, and 27 percent cited “settling an argument” as a possible rationalization.

The problem, says Hofmann, is that children and teens are not exposed to situations that hammer ethical behavior home. “The infrastructure in day-to-day life doesn't help children understand and navigate through the ethical decisions that they have to make,” she says. She advises parents to put ethical behavior in perspective, by talking to them about situations in their own lives. In case of cheating, for example, she suggests turning the tables and asking “If everyone in the class were cheating, how would it make you feel about all the hard work and studying that you've done?” When kids start thinking about ethics as it applies to their own lives, not just in the abstract, they begin to understand just what they're doing and why. “Relevancy is absolutely critical,” says Hofmann.

Wondering how else to cultivate an ethically able teen? Here, says Lerner, is some advice from his book The Good Teen: Rescuing Adolescence from the Myths of the Storm and Stress Years.

Next Article: Teaching Kids to Give Thanks
We enable strictly necessary cookies to give you the best possible experience on Education.com.Cookie policy