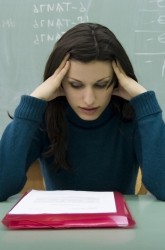 At some point, everyone blanks on an important test, even if they've been studying hard. But before taking a blind stab at a multiple choice question, there are things students can do to cut their losses. By using deductive reasoning, logic, and a pinch of common sense, students can learn to make educated guesses, and lose the test-taking jitters along the way.

As a school counselor, I've seen struggling students gain confidence and succeed using just a few test-taking strategies. Take Evan, for example. Evan was a seventh grader who tried hard, but failed miserably. The worse his grades got, the worse he felt about himself. While I emphasized the importance of preparing for tests by completing his homework and studying, I told him I’d let him in on a little secret. His ears perked up and I honestly think he thought I was going to give him the answers! Obviously not! I told him I had something better: test taking strategies he could use even if he couldn’t remember everything he'd studied.

Here's a starter kit on making an educated guess when test stress has your brain blocked:

Answers A and C use similar phrasing, so it’s best to pick one of those choices.

The following test taking strategies have helped my students academically, socially, and personally. Not only do they do better on tests, they feel better about themselves and more confident around their peers, too.

Next Article: Test Taking Strategies for Short Answer and Essay Tests
We enable strictly necessary cookies to give you the best possible experience on Education.com.Cookie policy