The Upside of NCLB 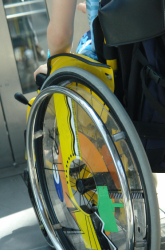 Since the No Child Left Behind (NCLB) Act was passed into law in 2002, it has become one of the most divisive issues in education today. The measure's objective was to close the achievement gap, but many say that the way the law measures success or failure - by focusing narrowly on standardized tests - is wrong. The act is up for NCLB reauthorization this year, and whether it gets scrapped or tweaked is the question on everyone's mind. But despite all the flack NCLB is getting, there's a new report out which says at least one group has benefited overall from NCLB: students with disabilities.

The National Council on Disability (NCD), an independent federal agency, says students with disabilities have traditionally been one of the most ignored sectors of the school population—they often weren't included in statewide testing, didn't have access to the same curricula, and their academic abilities were underestimated. Martin Gould, Director of Research at NCD, says schools and districts weren't held accountable for the achievement of disabled students.“There wasn't the expectation that they could access the same curriculum, and accounting and reporting wasn't expected,” he says. That has changed drastically since 2002, according to a recent NCD progress report. Basically, when it comes to making lower-performing students count, NCLB and the Individuals with Disabilities Education Act (IDEA) get high marks.

Using data from the National Assessment of Educational Progress, a test taken by students in all states, the report shows a marked increase in the scores of students with disabilities. This is especially true for elementary school students. And while there isn't a marked increase in test scores among high school students with disabilities, the report indicates that they are graduating at higher rates.

NCD also spoke with teachers, parents and other “stakeholders” in special education to get their perspective. The report says, “It was clear from our interview with staff members that some positive changes are taking place.” One of the most positive outcomes of NCLB, according to those interviewed, is that schools are now including students in statewide assessments and high school exit exams. Often that means accommodating the student by giving additional time, increasing the print size, or even providing an entirely different kind of assessment. States must be able to show that at least 95 percent of students have taken the test, and out of that pool, up to one percent are allowed to take alternative tests. Diane Browder, PhD., professor of special education at the University of North Carolina at Charlotte, has studied these types of alternative tests. She says many of them involve very creative, performance-based types of assessment, such as role-playing. Regardless, they all have to be aligned with the regular curriculum. That means that students with disabilities are now given access to that curriculum. “This is the silver lining in NCLB,” Browder says. “I think it has increased the educational opportunities for students with disabilities. Many of them are being exposed to the subjects of literacy, math and science instruction for the first time.” And, Browder says these students are doing very well with this new content. “It has been encouraging and surprising,” she says.

Another domino effect of testing, according to Gould, is increased access to high quality teachers in order to make this mainstream content learnable for students with special needs. “This was a real plus and long overdue,” he says.

However, not everyone in the field of special education is in love with the idea of testing students with disabilities. In its report, NCD admits that IDEA and NCLB aren't perfect systems. Many of the stakeholders interviewed for this report stated that an unfortunate side-effect to NCLB is too much testing. They also complained that the act needed to widen the definition of “high school graduate”—as NCLB stands now, only students who earn a diploma in four years are considered graduates. “They need to change the graduation requirement to give students a longer period of time,” Gould says.

Pulling these concerns together, the report offers several recommendations. It suggests that the law make a greater effort to recruit and retain quality teachers, and to give those teachers the resources they need to do the job. It says that NCLB and IDEA should be pulled into alignment so that “schools aren't duplicating reporting efforts,” Gould says. NCD also warns that assessments should measure more than just academics: life skills and employability skills should also be evaluated.

It's hard to say how this report will effect the decisions of policy-makers when it comes time to reauthorize NCLB. For Browder's part, she says, “If NCLB goes away tomorrow, I think parents have seen enough change in their children with these new opportunities that they won't go back to days when they didn't have access to the curriculum,” she says.

Gould says a copy of this report was sent to the President and every member of Congress. So at the very least they got the memo.