Log in with different email
For more assistance contact customer service
Parenting and Families
Discipline
Take a Time Out from Time-out!

Take a Time Out from Time-out! 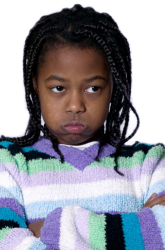 You need a time-out! How many times have you heard a parent say those words or said them yourself? In the ideal situation, a child takes his time-out, calms down and comes back ready to fix the problem. But, if you're like many parents, it's more likely that he's kicking, screaming and trying to escape the whole time. Why, for so many of us, doesn't time-out work?

One reason the strategy doesn't work is because parents don't always use it appropriately. A time-out is supposed to curb inappropriate behavior by removing a child from an enjoyable activity, not by isolating him from something he doesn't enjoy (like math or vegetables). But, according to Ross Greene, Ph.D., clinical psychologist and founder of the Center for Collaborative Problem Solving, parents don't always do it that way. We tend to take kids away from situations in which they’re being disruptive. "Time-outs," states Greene"aren't typically given proactively, they're given reactively." Which means that we are using time-out when we don't know what else to do. But what's the alternative?

According to Jean Illsley Clarke, Ph.D, author of Time-In: When Time-Out Doesn't Work, what parents need are other ways to approach and solve the underlying problems that are causing our children's misbehaviors. Says Clarke: "Even if time-out is working, we need to give parents more options." Clarke's option is called Time-In, an interactive process between parent and child that uses the 4 "A"s as a way to solve problems:

Greene's Collaborative Problem Solving (CPS) model is also interactive, which means that parents and children collaborate to solve problems. Here, it's important for parents to understand that kids with challenging behaviors aren't misbehaving on purpose, but rather are lacking the cognitive skills they need to find solutions. Though it's our job to teach those skills, Greene says that most parents use what he calls "Plan A," which is "to respond to problems by imposing your will."

The CPS model teaches parents to use less Plan A and more "Plan B," which requires parents to respond to a child's concern with empathy, defining with the child the problem that is causing misbehavior and working together to find a mutually satisfactory solution.

There's also a "Plan C." Greene describes this resort as parents needing to know when to "drop some of their bigger fish and fry some of their smaller fish first." Think of the small fish as the expectations that can be temporarily dropped while you deal with bigger problems first. So, if your child has screaming meltdowns every time he has to leave the house (a big fish), you may need to ignore his refusal to wear a coat when he does decide to go out the door (a small fish).

It's certainly not easy to change the way you deal with your child's misbehavior, especially if time-out is your tried and true solution. But, if it isn't working, take a time out from time-out and try something new. After all, Dr. Clarke reminds us that "when a child is misbehaving, as parents we need to change the way we are behaving, too."