5 Reasons to Turn the TV Off This Summer 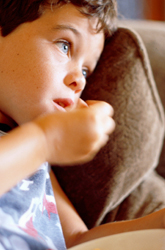 Want to do something really good for your child this summer? Something that will boost their health, their energy and even their mental outlook? There's no need to buy new vitamins or enroll them in a full-day summer camp (although these might be not be bad ideas either). There's something even easier that parents can do: just turn off the TV!

Ok, so you might encounter a lot of protest. After all, TV watching, along with other forms of 'screen time', is such a fixed part of most American households that the idea might not win you popularity contests at home. According to Nielsen Media Research, the average American home now has more television sets than people in it - 2.73 TV sets compared with 2.55 people. And, typically, these TVs are on for over 8 hours each day, with the average American watching 4 hours and 35 minute each day. Many of these 'average Americans' are kids.

All this TV watching, web surfing, and video game playing has come with a steep cost. As Robert Kesten, Executive Director of the Center for Screen-Time Awareness says, "Actual TV watching has stayed about the same, but overall screen time has gone up dramatically" – when other forms of technology are taken into account. Kesten adds, "Technology is not only seductive but addictive."

Despite claims that children's programming holds educational value, studies show that too much screen time can have a negative effect on children. Looking for a reason to boot that couch potato outside? Here are five findings to get your motor running:

Summer is the perfect time to trade in TV time for hours spent outdoors, exploring nature, doing crafts, and exercising. Spending time outside connecting with nature has been shown to produce a healthier mental and physical outlook. And kids who watch less TV are more likely to engage with real people in real time.

But cutting back on TV is easier said than done. After all, parents have reasons that our kids watch TV – often, it keeps them busy so we can get our other things done. Also, many parents are afraid of letting their kids outside to play because of media reports which depict neighborhoods and even backyards as being unsafe for kids. Here are a few ideas to help make a transition to less TV watching:

Next Article: 5 Sensational Summer Festivals
We enable strictly necessary cookies to give you the best possible experience on Education.com.Cookie policy