Perfect SAT? Make More Out of Your High Score 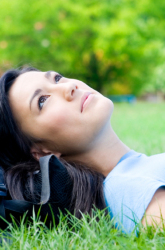 Despite new trends to abolish the SAT, this test still plays a large role in college admissions, and getting high marks can make or break a student's application. Now, teens with stellar SAT results haven't just given themselves a leg up to a great school, they've also scored themselves a golden opportunity in the field of publishing.

Workman Publishing is hosting a competition to award students with a score of 2350 or higher the role of serving as the guest editor of Up Your Score: The Underground Guide to the SAT . The book was originally written in 1991 by three college students who aced the test, and wanted to pass on their tips and strategies to help others do the same. When it came time to revitalize the book in 1993, the publisher decided to relaunch the next edition by bringing in a teen editor, to overhaul any lame language and bring the pop culture references up to date.  The book has had a teen editor every year since.

What exactly does the job entail? In essence, the guest editor represents the book for two years, first by revising and updating the content for the 2009-2010 edition of the book, and then by serving as the book's media spokesperson when publicity gears up in late summer of 2008. That means the student does phone, radio and television interviews and hosts a blog. Not a bad thing to put on the old college application, eh?

While Workman is obviously looking for a student who knows what it takes to ace the SAT and has great writing skills, Senior Editor Margot Herrera says they aren't only looking for a braniac. “They have to have a good sense of humor with their finger on the pulse of teen culture, and they have to be responsible enough to take on this project,” she says. This isn't a job for any slacker, and that's why the publishing company is paying $2,500 for the gig.

So, how do you get your kid on the cover of Up Your Score? The online application is straightforward: besides the usual details, your child will need to provide her SAT score and a writing sample of 200-500 words. Although kids can be as young as thirteen to enter the competition, Herrera says most of the previous editors were between 17 and 18-years-old. If your teen becomes a finalist, he will need to provide a copy of his official test results and be interviewed over the phone.

The contest deadline for this year is November 30th, so if your kid has what it takes, shake a tail feather and apply at http://www.workman.com/upyourscore/

Between the glimpse into publishing they'll get from sweating over the manuscript, and the media training they'll receive before hitting the publicity trail, there's a lot to learn here.

Next Article: SAT Math: What It Is and How to Prepare
We enable strictly necessary cookies to give you the best possible experience on Education.com.Cookie policy