Log in with different email
For more assistance contact customer service
Physical Health
Exercise and Fitness
Back to School: To Walk or Not?

Back to School: To Walk or Not? 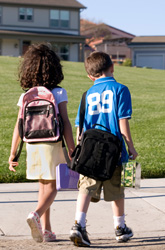 In the 1980s, bike racks jammed with students' bikes were common on school grounds, but today, you're more likely to see vehicle traffic jamming the school drop-off zones than bikes streaming in. In fact, the Centers for Disease Control (CDC) reports that between 1969 and 2001, the number of kids who lived within a mile of school and used active transport (walked or rode bikes) to get there dropped from 87 percent to 63 percent. For those who lived between one and two miles from school, the numbers declined even more, from 49 to 18 percent. What's going on?

There are a few main reasons many kids are no longer walking or bicycling to school the way they used to. Topping the list? Parental worries. The CDC lists parents' main concerns as being: distance to school, adverse weather conditions, fear of crimes against children and crime in the neighborhood, and traffic danger. But several organizations have mobilized in recent years to address these concerns, and to remind parents and children of the benefits for kids and their communities of using their legs to get to school – increased physical activity for kids, improved pedestrian safety, and healthier and more walkable community environments with better air quality.

Statistically, while the amount of traffic in school zones has increased over the years, along with the distances many students have to travel to school, the number of serious crimes committed again children has not. The CDC reports that "While there is no trend data for younger children, the risk of violent crimes against youth aged 12–19 years has actually dropped in the past 30 years and of those numbers, the rate of youth abduction is low in school areas."

Nancy Pullen-Seufert, Program Manager at the National Center for Safe Routes to School, adds that "the incidence of having children abducted on their way to school, particularly by someone who is not a relative, is very very low. In a way the real issue is around parent perception."

With cases of childhood obesity continuing to rise, walking or bicycling to school can provide much needed regular physical activity to children. Pullen-Seufert says, "If we provide an opportunity for children to build walking or cycling into their daily lies, it's something that can they can carry with them."

The CDC also notes that the number of cars on the road between 7:15 and 8:15 a.m. increases 30% during the school year, and 20–25% of morning traffic during the school year is parents driving kids to school. More kids walking or bicycling to school therefore means a cleaner environment with better air quality, fewer cars on the road, and less traffic congestion around schools – also making a safer environment for walking to school.

What can parents do to get their kids walking or bicycling safely to school? Here are a few simple things to keep in mind.

Walk to School Day this year is October 8, so join in and keep on walking throughout the year!