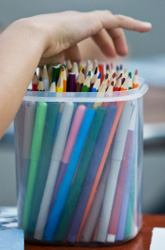 It’s spring when the realization dawns: in a few more months your child will officially be a first-grader! It may seem like there's still plenty of time left to brush up on all the math skills that will prepare your kindergartener for success next year, but the reality is that there’s still a lot to cover, and time will fly. In the last few months of kindergarten, your child will be challenged to take what she’s learned in math this year and apply it in new and more abstract ways. The list of shapes she knows will expand, the ways she uses addition and subtraction will change, and she’ll not only be finding solutions to mathematic problems, she'll also be choosing the approach she’ll take. Want to know what's in store for your child in math from now, until the end of the school year? Every school is different, but here are the top six topics teachers typically cover from Spring through kindergarten graduation: 1. Counting, Recognizing and Writing Higher Numbers: As the year comes to a close, your kindergartener will perfect his counting and number recognition skills. Different schools have different standards as to how high each student should be able to count by graduation, but usually it’s at least 30.  Some schools set a goal of 100. Math and writing go hand-in-hand: your child needs to not only be able to work with numbers, but be able to represent them. By now, the numbers that he used to write backwards should be turned around, and your child should feel confident recognizing numbers, even when they are out of order. 2. Geometric Solids: Also referred to as three-dimensional shapes, these brainteasers have complicated names, such as sphere and rectangular prism. If your child can get the terminology down before summer arrives, first grade geometry is sure to shape up nicely for him. 3. Addition and Subtraction: Instead of just finding the answer to an addition or subtraction problem, your kindergartener will be challenged to create addition and subtraction problems based on oral prompts (such as short stories), pictures, and manipulatives. For example, the teacher may show a picture of six apples, and then cross out two of them. Students would then be invited to write a subtraction sentence based on the scenario. (6-2=4). 4. Strategies for Problem Solving: As in the apple example above, students will begin to have to make decisions about how to solve a problem. They’ll have to choose an operation, choose the correct addends, and find the sum or difference. Students are making a gradual development from concrete mathematic thinking, to much more abstract thinking. Your mathematician has come a long way since the beginning of the year! 5. Size and Capacity Comparisons: Capacity is covered briefly in the spring of kindergarten, and size is taught and reviewed all year. Now kindergarteners will be making comparisons using appropriate descriptive words. Your child will be able to answer questions like, “Which holds more water, a spoon or a bowl?” 6. Symmetry: Once fractions are finished, symmetry is a breeze. All those cutout snowflakes and Jack-O-Lantern projects that your child may have done this year will be the groundwork for understanding symmetry.

Want to know where your child needs to be by the end of the year? Curriculum differs by state, district, and even schools within a district, but at minimum, by the end of kindergarten, students working at the standard level: •    Understand that numbers are symbols that tell you how many •    Know about time and can tell time to the nearest hour •    Can recite the numbers 1-20 when they see the corresponding flash cards •    Can combine and separate sets using objects •    Can sort and classify sets based on attributes •    Can solve addition facts through 10 •    Compare more, less, and same •    Recognize half of a whole object (some schools also require kids to recognize quarters)

Now is the time to look for summer workbooks that will reinforce the math concepts your child worked so hard on this year, so she starts first grade in the Fall armed with all she learned in kindergarten. Kindergarten math games and other math resources provide an interactive way for kids to practice their math skills. Most of all, as the school year draws to an end, celebrate your child's accomplishments. In kindergarten he's moved from a counting style that could be compared to Swiss cheese (lots of holes!) to formulating an approach to an abstract problem… That’s a long way to come since the beginning of the year. Congratulations to your soon-to-be first-grader!

Next Article: Sugar and Spice: Why Rhyme Is So Nice
We enable strictly necessary cookies to give you the best possible experience on Education.com.Cookie policy