When Your Child Doesn't Make the Team 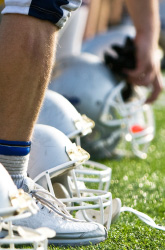 The beginning of the new school year means that school sports tryouts are just around the corner. And for those interested in acting in the school play or performing with an advanced musical ensemble, there's this in common with the athletes: some will make the cut, and many will not.

At any level, being cut from a team or group of selected individuals hurts. Being young doesn't prevent kids from feeling a pretty sharp sting of rejection if they don't make the team, especially if it's in a sport or activity that they've done well at and really enjoy doing. And sometimes parents can make the process even harder.

Parents ultimately can't control whether their child makes a team or not, but if he or she doesn't, it's up to the parents to try and soften the blow. Parents can yield a lot of influence at this vulnerable point, for better or for worse. They can discourage the young athlete or performer from any further attempts, or they can help them learn to deal with rejection as a part of life that everyone experiences sometimes, and help them bounce back with grace and renewed energy to the next endeavor.

So how can you help your child deal with the rejection of getting cut? Joel H. Fish, PhD, Director at the Center for Sport Psychology, and author of 101 Ways to be a Terrific Sport Parent, offers this helpful advice on how parents can help support and encourage the young athletes in their home.

Parents can also help kids realize that even though they didn't make it on the team they were hoping for, they have other options. Community or church leagues may offer opportunities to get involved, or maybe a different sport or activity altogether would provide a fun and exciting challenge. Some kids who have been cut from one team have gone on to be very successful in a totally different area. Others who were at one time cut from their high school teams, like basketball great Michael Jordan, have gone on to become outstanding athletes.

Every young athlete or performer who is making the effort to succeed will eventually encounter some stiff obstacles and competition. Parents can help their kids to not only handle these setbacks graciously, but to actually grow from them!

Next Article: Tips for Parenting a Competitive Child
We enable strictly necessary cookies to give you the best possible experience on Education.com.Cookie policy