Young Adult Fiction for the Future 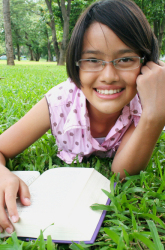 Young adult fiction may make you think of rants on schoolwork and prom night drama, but some youth literature urges kids to think about the ever-changing society in which they live as well as the cultures surrounding them. A book is a great way to introduce controversial issues like cloning and child labor, or explore the mode of communication in the iGeneration. Here are five compelling and thought-provoking novels that will widen your child's perspective of the world and the future:

1) House of the Scorpion by Nancy Farmer

In this futuristic sci-fi thriller, Matt Alacran, a young clone, was harvested from the drug kingpin El Patron, who controls opium fields between the U.S. and the former Mexico. Matt struggles to understand his identity in his volatile, sheltered world, and Farmer introduces cloning issues and explores what it means to be human. (Ages 11 and up)

2) ttyl (Talk to You Later) by Lauren Myracle

Author of books like l8r, g8r — “Later, Gator” in Internet speak — Myracle recounts the friendship between three pals, Zoe, Maddie, and Angela, entirely in instant messages. In their sophomore year of high school, they deal with crushes, mean popular girls, and conflicts with each other. Myracle uses net lingo and emoticons (faces made with punctuation marks) in a creative approach to juvenile chick lit. (Ages 11 and up)

Eleven-year-old Lu Si-Yan is sold into servitude after her father’s death to help repay her family’s debts. Forced out of rural China into a city of factories, Lu Si-Yan feels as valuable as a drop of spilled water. Grindley follows this brave girl as she overcomes obstacles in an oppressive society and illustrates the low status of females and harsh reality of child labor in modern-day China. (Ages 8 and up)

In this sequel to The Breadwinner, Parvana, a thirteen-year-old Afghan, disguises herself as a boy as she searches for her family in Taliban-controlled Afghanistan. War breaks out, and she meets other refugees seeking safety. Amid the chaos, she retains her hope and becomes her band’s resourceful leader. Despite heavy content and political dialogue, the ending of this gripping narrative is optimistic. (Ages 12 and up)

When Sahara Jones is placed into a special needs class, her mom insists she joins the “regular” fifth graders. Her new teacher, Miss Pointy, is big on student individuality and eccentric subjects. Sahara doesn’t do her schoolwork, yet writes in secret, particularly about her father’s abandonment. Miss Pointy encourages Sahara to practice her talent, and Sahara finds an outlet — and the courage — to express herself. (Ages 8 and up)

Next Article: Great Books to Kick Off the Olympics!
We enable strictly necessary cookies to give you the best possible experience on Education.com.Cookie policy