Could Your Child Have Nutritional Deficit Disorder? 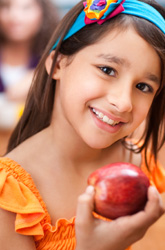 There's a new disorder wreaking havoc on children's health. It's called Nutritional Deficit Disorder, or NDD. You won't find it mentioned in any of the medical texts on the pediatrician’s bookshelves. There is one book on the subject, written by the founder of the disorder, Dr. Bill Sears. And in fact, even he admits that it is not a real clinical disease.

“I basically created a disease,” he says. But why? “Parents were just not getting it. To be honest, we pediatricians were being wimpy. Parents would come to us and we would say, ‘Your child is a little overweight, your child is having attention problems, maybe you should feed him healthier foods.’” But at a time when obesity rates, chronic illnesses, and mood disorders in children are all on the rise, it was obvious that parents weren’t getting the message.

That’s why Dr. Bill (as he prefers his patients call him) decided to take matters into his own hands. Once he started giving it a label, and one that sounded like all of the other disorders out there, he found that patients were taking it more seriously. They were actually willing to put in the effort to change their children’s diets, and with excellent results.

In his book, Dr. Bill explains how the food that your child eats can improve the way that your child learns and behaves. He has found that many children who have a diagnosis of ADD will no longer exhibit ADD symptoms once they are treated for NDD, and the same applies for similar disorders.

Life has changed in recent decades. We eat more chemical-laden foods, doused in artificial colors and flavors. “Chemical food,” as Dr. Bill calls it, is cheaper to manufacture, which is why the food industry produces it. But he maintains that we cannot blame the food industry. “If we wouldn’t buy it, they wouldn’t make it,” he says. “And we only buy it because it’s so cheap. We live in a country where food is cheaper than ever but medical costs per person are the highest in the world.”

In addition to simply eating “real” foods, Dr. Bill suggests offering children foods that are essential for optimal brain development in children. Here are some of the “grow foods” that Dr. Bill says are important foods to feed a growing brain:

Filled with antioxidants, blueberries are the perfect sweet snack for a picky child. The flavonoids in the skin of the blueberry are also beneficial.

Everyone knows that spinach is healthy, but they may not realize why. Spinach and other green, leafy vegetables are a good source of folate, or folic acid. Pregnant women take folic acid supplements in order to limit the risk of brain defects in the fetus. In children and adults, folic acid is an important prerequisite for healthy brain cells as well.

If you want to give your child’s food a crunch, avoid deep-fried batters and salty chips, and try sprinkling on some nuts instead. Filled with fiber and nutrition rich, nuts will fill up your child with their healthy fats and proteins.

Dr. Bill also suggests that children exercise their bodies in order to keep their brains in gear. This proposition is easier said than done in a world of texting, video games, and endless web-surfing, but Dr. Bill believes that it is an important component of treating NDD.

And although many kids are picky eaters, Dr. Bill maintains that study after study has shown that a child’s taste can be shaped. Until now, their tastebuds have been shaped to need highly sugared and colored foods, but they can be reshaped by merely offering the same healthy (and possibly rejected) food time after time.

So why do doctors tend to diagnose children so often without checking for NDD first? “Doctors don’t have time to go into all this,” says Dr. Bill. “They don’t have time to take a full nutritional history, analyze it, and tell parents what to do about it. So they give out medications instead; it’s a lot faster. And because of the recent healthcare reform, this is only going to get worse.”

So if doctors aren’t going to spread the word, it looks like parents are going to have to educate themselves.