Log in with different email
For more assistance contact customer service
Parenting and Families
Hunger Games or Hugo? Movies for Every Age

Hunger Games or Hugo? Movies for Every Age 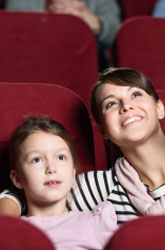 Twenty-four teens are placed in an arena, pitted against one another in a no-holds barred fight to the death. If this sounds to you like a nightmare no kid would ever want to witness, think again: it's actually the plot of The Hunger Games, the best-selling young adult book-turned-screen saga at a theater near you.

For many parents, this represents the next in a series of blockbuster films that push the envelope on violence, sex and everything in between. Though the Motion Picture Association of America offers a ratings system (G, PG, PG-13, R and NC-17) to guide kids toward age-appropriate content, it can often feel like MPAA ratings are inconsistent or misleading. In fact, a 2008 study by economics professors David M. Lang from CSU Sacramento and David M. Switzer from St. Cloud State University found that "the average sex rating for PG-13 movies in 2007 is equivalent to the average sex rating for R movies in 1993...movies today involve more sex, violence and profanity than they did 15 years ago."

But are a few extra sword fights really that big of a deal? The short answer is yes: movies that expose kids to violence or sex before they're ready can negatively impact your little one's development in a serious way. The American Association of Pediatrics revealed in a 2001 report that "media violence can contribute to aggressive behavior, desensitization to violence, nightmares, and fear of being harmed." If you're on the fence about which flicks will work for your kids, take heart in the fact that you can take action. Use the tips below to help you decide if a film is age-appropriate for your kid.

Though you can't control the gory details of every Hunger Games fight sequence, you can make an effort to learn what works best for your child. Taking action through the tips above will help you look beyond the MPAA ratings, and make going to the movies a stress-free treat for all involved!