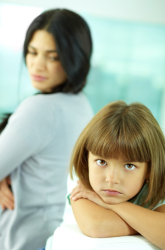 Spanking is one of the most common disciplinary methods in America, with 94 percent of parents with 3- to 4-year-olds admitting they’ve spanked their child in the last year. But it’s risky for modern parents to employ such a technique, insists Michael H. Popkin, Ph.D., an Atlanta-based advocate for nonviolent punishment.

“Spanking is really a relic of the past, when superiors punished inferiors corporally, whether by the lash, the stockade or chain gang,” he says. “In a society of equals where corporal punishment is no longer tolerated, children eventually come to resent being spanked and unconsciously look for ways to get even.”

The long-term effects of the practice can be devastating. In 2012, Canadian researchers found that many spanked children grew into adults who struggled with depression, aggression, anxiety, drug and alcohol dependency, and a host of other psychological problems. It can also devastate the relationship between parent and child.

Popkin admits that some adults “put it behind them and have a good adult-adult relationship” with their parents. But he’s also “heard stories from adults who were only spanked one time who said that the relationship was never the same again.” He says spanking is a gamble that’s not worth taking, as other disciplinary methods “have been shown to be more effective in the long run for helping children internalize positive values, rather than learning to fear authority."

Here are some alternatives to spanking:

Live in a democracy. In 1962, clinical psychologist Thomas Gordon, Ph.D, developed a system to satisfy the needs of parents and their children through active listening and “I” messages. When a parent actively listens, he reflects on what his little one has said to him. Restating what’s been said confirms the parent has understood the message and the feelings behind it. It also ensures the child feels valued and heard. A child can also use active listening to ensure his parent is engaged with what he has to say.

“I” messages communicate information about the self. Each message should address the behavior that causes a problem, the effect of the problems and the feelings that surround it. By looking inward, parents and children avoid accusing or judging one another. For example, a parent might tell his child, “I don’t like it when you speak loudly while I’m on the phone because I can’t hear your grandmother.” This is much more constructive than spanking the child, or even saying something like, “You are being inconsiderate and rude right now.”

Unlike a time-out, parents can occasionally enter the calm-down zone with their child. This ensures children see the zone as an area to regroup, rather than a place to be punished. The objective is to calm, rather than discipline, at this point. Studies show children can process the lessons you teach better when their brains are calm. Sending them to a calm-down zone primes them to receiving lessons about what they’ve done wrong, and how they can do better next time.

Just say “no.” This one sounds simple, but you’d be surprised how often parents forget it in times of stress. A firm “no” said in a stern tone of voice while making eye-contact with your child can effectively end an argument. Refusing to enter into further discussion while your child is keyed up is important. Don’t escalate the argument. Instead, wait until your child is calm before having a brief discussion about the problem and any consequences.

Many parents spank because their parents did, as did their parents before them. Many experts urge parents to seek out new, nonviolent disciplinary tactics and break the cycle.