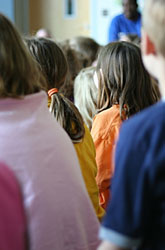 Brown versus the Board of Education—perhaps one of the most significant judicial rulings in the history of the United States.

When the Supreme Court declared in 1954 that racial segregation “violates the 14th amendment to the U.S. Constitution, which guarantees all citizens equal protection of the laws,” the court, according to the Brown Foundation, “laid the foundation for shaping future national and international policies regarding human rights.”

Segregating people—whether based on the color of their skin, their abilities, gender, religious beliefs, or otherwise—violates their rights as human beings.

But as significant as the 1954 ruling was, it was only one of many turning points in an ongoing effort to make America's classrooms reflective of the greater demographic. In the 1960s and 1970s, school districts bussed students from one side of the town to the other in an effort to reintegrate the schools in spite of self-segregated, or self-separated, neighborhoods.

Then this practice stopped.

“Beginning in the 1990s there was a series of Supreme Court decisions that undermined desegregation efforts,” says Gary Orfield, Professor of Education, Law, Political Science and Urban Planning and Co-Director of the Civil Rights Project at UCLA. “There’s been virtually no resources from the federal government for desegregation since 1971.”

Part of the problem goes back to the original Civil Rights Act of 1954. Title VI of the Act prohibits discrimination in assigning students to schools, classes, or courses of study in program or activities that receive federal financial assistance. This act was revised in 1998. Edwin Darden, Director of Education Law and Policy for Appleseed, a nonprofit network of public interest justice centers, explains that the courts have ruled in recent years that the individual student is most important. “You have to take into account the individual students as opposed to the school at large, or any one particular group of students,” Darden says. Long story short, when parents today want to bus kids to get more diverse groupings of students, in most cases, the law says they can’t.

“Conservatives say the natural thing is to have neighborhood schools,” Orfield says, “but our statistics show that black and Latino kids when they go to neighborhoods schools end up in impoverished schools. So now it’s segregation by race, by poverty, and by language—it’s double and triple segregation.”

According to Orfield, misconception about desegregation is prevalent. “People think this is about benefiting only the blacks and Latinos, but it benefits the white kids, too,” he says. “Too many white children are very poorly prepared for the society they will live in as adults. There are nearly half nonwhites already in this country, and within the next decade, it’s going to be a predominately nonwhite America.”

Still, opponents of desegregation say integration for the sake of diversification is wrong. Lino Graglia, law professor at the University of Texas at Austin and a vocal opponent of desegregation, is possibly best known for his 1976 book Disaster by Decree: The Supreme Court Decisions on Race and the Schools. He argues that mandatory desegregation leads to white flight, specifically of the "middle and upper classes," which accelerates urban deterioration and racial separation in society.

Graglia explains that the 1968 Supreme Court ruling to start busing kids to other schools for the sake of integration was “a terribly mistaken and destructive policy imposed by the courts.” He explains that the plan for desegregation was only meant to bus kids for one year, to turn the problem of “separation” around. “But as it worked out in practice,” Gaglia says, “you could only stop the busing for racial balance when there were no longer any whites to be balanced. It would only stop when you had in effect driven the whites out of the school system—when you converted the entire school system.”

In addition being ineffective, Graglia argues that the policy was dishonest. According to Graglia, the result of the Supreme Court’s Brown ruling was a failure. “Ending segregation turned out to be something of a disappointment to the civil rights enthusiasts. Segregation ended, but separation continued.” He explains that the courts wanted to correct the situation, and in order to do that they had to mandate integration. “Suddenly it was not enough to end segregation,” Graglia says. “The courts couldn’t say, ‘Well Brown prohibited race discrimination to segregate, but now we’re going to require race discrimination to integrate.’ It’s a self-defeating policy. It was totally dishonest.”

What about integration when it comes to ability? Here too there’s been a lot of debate. Some argue that having children with large variances in ability in the same class puts too much pressure on the teacher. Federal law, however, says to mainstream as much as possible. The federal statute that speaks to this is the Individuals with Disabilities Education Act (IDEA). “The main mandate of IDEA is that students are to be placed in classes with the least restrictive environment,” Darden says. “Students are required to have Individualized Education Plans (IEP) tailored to their needs after an assessment has been done.”

“Special education is a great blessing for the United States,” Orfield says. “It created a right for students who would have been excluded from school.”

Still, he says, there are problems with the system. “What we see in our research is a tremendous overplacement of black males,” Orfield says. “And that’s a big problem because it’s very hard to transfer back into the mainstream classrooms.”

Orfield explains that schools have few resources for children who act out, and special education is one of those resources. “We create little ghettos, little segregated classrooms in school where black boys are segregated,” Orfield says. “Black boys who are being labeled as learning disabled based on behavior.”

And it’s never just as simple as dropping kids of different ethnic origins or physical or intellectual abilities into a classroom together. Children—not unlike adults—have to be prepared.

Scott Plous, a former recipient of the MacArthur Foundation Fellowship in International Peace and Cooperation, looks at desegregation efforts from the perspective of a social psychologist. In addition to serving as a researcher and professor at Wesleyan, Plous maintains a suite of nonprofit Web sites called the Social Psychology Network. “I think the most important thing is how integration is handled so that each child is regarded by their peers as a valued member of the class,” Plous says.

He explains that when students from widely different backgrounds are unprepared for integration, the implementation can be viewed as unsuccessful. “In the process of integrating classrooms in the early 1970s, there were a lot of racial conflicts—it wasn’t going well,” Plous says. “There is a technique that was born out of the movement toward desegregation known as the Jigsaw Classroom.”

In essence, the technique enforces the concept that every person in the class, or small group, is essential. In order to succeed, every student must value and be able to depend on every other student.

Elliot Aronson, who, according to Plous, is one of the world’s most renowned social psychologists, developed this cooperative learning technique specifically to respond to changes in segregation. “One of the nice things about the technique,” Plous says, “is that it has lots of research and evidence to support it.”

Research has shown that with the Jigsaw Classroom children learn more effectively, enjoy school more, and have lower rates of aggression in the classroom. It’s a tool, Plous says, that can help teachers and schools gracefully handle integration. “Wise implementation of cooperative learning techniques can go a long way,” he says.

Will we see a resurgence of integration efforts? The verdict is still out. Let's just hope those implementing integration policies will use history to guide the way.

Next Article: Outrageous School Policies: What You Can Do
We enable strictly necessary cookies to give you the best possible experience on Education.com.Cookie policy