Log in with different email
For more assistance contact customer service
Parenting and Families
Parenting
Are American Parents Different? What You Should Know

Are American Parents Different? What You Should Know 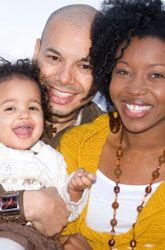 Think that all parents do essentially the same things with their infants, around the world? Think again. Studies have actually shown that parents around the world interact completely differently with their infants than typical American parents do. Not only that, but these parenting differences can affect the way that the infants eventually grow up.

Five month infants in different cultures are surprisingly similar to each other, after taking into account individual personality and genetic differences. Very young infants are born with the same instincts around the globe: the ability to nurse, the urge to cry when they need something, and the attraction to faces and voices. These instincts give infants the ability to survive and build social relationships with those around them.

But at around six to eight months, infants in different cultures become more and more different from each other, based on how their parents interact with them.

You may be surprised to learn how different non-American parents view their infants and interact with them. Here are some of the differences studies have found:

American parents may think that their methods of raising children are mainstream, but people from these other cultures would disagree. For example, African Gusii mothers reacted extremely negatively to videotapes of American mothers who took “too long” to respond to their infant’s cries. Mothers from other cultures may also find the over-verbalization of American parents laughable, since they have the attitude that young infants do not require that sort of socialization.

“Probably every parenting practice has both positive and negative consequences,” says Miller. “On the positive side, being more verbal and assertive, and being more independent, seems to make it possible for people to ‘strike out on their own’ in life. It may be what is associated with more creativity, with people being able and willing to start completely new businesses, and other such behaviors. On the other hand, it may lead to a kind of feeling of disconnection from other people, even within one’s own family…Finally, there are increasing amounts of data showing that the child rearing practices use can be stressful, and can lead in some individuals to…later psychopathology.

But what does this mean to you, as a parent? If there is one lesson that you take out of these studies, it should be that you should not second-guess your parenting practices. Realize that many of the parenting practices that are common in the Western world may be cultural or arbitrary, and may not work for you or your family. Even the way that you were raised is only one way in which it can be done. For example, some infants may need to be pushed a bit less towards independence, or may need to be held more than other American parents think is necessary. Knowing that thousands of other parents make different choices than their American counterparts can give you the strength to go against the tide when you feel it is necessary.

At the same time, Miller adds one caveat: You must take into account the other ways that your culture affects your parenting practices. For example, in many cultures in which infants are held all of the time, the culture is built in a way that makes this possible. These parents may live with extended family that is willing to pitch in to help often, and it may be culturally acceptable to bring their baby to functions that are expected to be baby-free in America.

Next Article: Diet Dangers: Baby Foods to Avoid
We enable strictly necessary cookies to give you the best possible experience on Education.com.Cookie policy