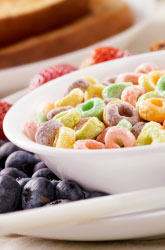 In 1950, children across the US suddenly started falling ill after eating a certain Halloween candy. It turned out that the candy contained a small amount of the color additive RD&C Orange No. 1, which caused the illnesses. That year, Representative James Delaney raised the issue of cancer-causing food additives, including color additives. Between these two events, the FDA decided to reexamine the list of approved color additives and found that several of them had some serious side effects that had never been taken into account.

Today still, many people try to avoid color additives (as well as other food additives), fearing that they may be less safe than people commonly believe. But does this thinking have any merit to it? After all, doesn’t the FDA stay on top of all food additives and make sure that they’re safe before allowing them to be used in foods?

The FDA and Color Additives

Today, before the FDA can decide whether a new color additive is safe, it needs to explore various factors of the substance. These factors include the following:

According to the Code of Federal Regulations, a color additive can be termed “safe” only if there is “convincing evidence that establishes with reasonable certainty that no harm will result from the intended use of the color additive.” In other words, competent scientists need to attest to the safety of the additive, based on the research that they have seen.

“The concept of safety used in this legislation involves the question of whether a substance is hazardous to the health of man or animal,” explains Sebastian Cianci, a policy analyst at the FDA. “Safety requires proof of a reasonable certainty that no harm will result from the proposed use of an additive. It does not—and cannot—require proof beyond any possible doubt that no harm will result under any conceivable circumstances.”

The Threat of Carcinogens

Toxicologists who review these studies may recommend that the special FDA committees reevaluate some of the toxicity studies, including carcinogenicity studies, included in the petition. They may also recommend that the color additive be studied more intensely by the National Toxicology Program (NTP), whose job is to evaluate substances that may post a danger to public health.

Should We Avoid All Color Additives?

Some people, in an attempt to protect their health and that of their families, attempt to eat only foods that lack color additives (as well as other food additives). In their minds, these non-natural additives have not been studied deeply enough to ensure their safety, especially in light of the various additives that have been removed from the “safe” list after studies showed that they were unhealthy.

For example, FD&C Red No. 1 was found to be “toxic upon ingestion” due to animal feeding tests, and was subsequently removed from the “safe” list. In these tests, many of the animals being feed with FD&C Red No. 1 were found to have severe liver damage, and some of them died during the course of the study from this damage. Other food colorings were terminated from the list due to studied that showed that it caused cancer in mice or other animals.

What does the FDA say about people who have these concerns? They stress the fact that these food additives are listed on labels for a reason, and that these people can take advantage of that information.

“We appreciate consumers’ concerns about food ingredients,” says Cianci. “Labels provide a variety of information about a food, including its name, ingredients, and nutritional profile. For example, the labeling of any food containing color additives that FDA certifies for food use, such as FD&C Red No. 40 and FD&C Yellow No. 5, must declare those additives by name as ingredients. Labeling is a means of informing consumers who may want to avoid certain substances for health or other reasons of their presence in food. As stated earlier, FDA evaluates scientific data and information to ensure that a color additive is safe for its intended purposes. Any food containing an unapproved color additive would be considered adulterated under U.S. law and would be subject to enforcement action to remove it from commerce.”

No matter what your stance on color additives is, it's important to remember that the less processed and artificial ingredients your food has—especially when it comes to the food your kids are eating—the better. Take note and be sure to read labels together with your kids so you know what you and your family are eating.

Next Article: Keeping Teens Healthy - Benefits of Physical Activity
We enable strictly necessary cookies to give you the best possible experience on Education.com.Cookie policy