Log in with different email
For more assistance contact customer service
Parenting and Families
Attachment and Your Child
Attachment Parenting: The Key to Thriving Kids? 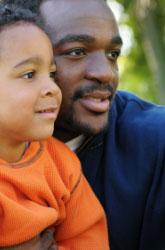 What if you possessed a secret formula that made your child smarter, more independent, more secure—a kid capable of forming deep and loving relationships, showing compassion for others, and having a true connection to her parents? Well there is no secret formula, but there is a secret: in developmental psychologist circles, it’s called “security of attachment”. And according to a huge body of scientific research, it has a major impact on a child’s ability to thrive, not just in the early years, but throughout her lifetime.

Daniel Siegel, M.D., clinical professor of psychiatry at the Center for Culture, Brain, and Development at UCLA, and author of the seminal book The Developing Mind and Parenting from the Inside Out, specializes in the study of attachment. He describes it as something of a magic bullet when it comes to child development.

While genetics, experiences, temperament, and many other factors contribute to a child’s personality, Siegel says, secure attachments lay the foundation for it all. Attachment “shapes children’s interactions with their peers, their sense of security about exploring the world, their resilience to stress, their ability to balance their emotions, and their capacity to create meaningful interpersonal relationships for the future.”

Having this foundation, or lacking it, Siegel says, affects everything from school success to the ability to form friendships. Self esteem, social skills, emotional intelligence … even who a child eventually picks as a life partner, can all be traced back to attachment, he says.

So what exactly is attachment? Siegel describes it as “an inborn system of the brain that evolved to keep an infant safe.” Translation: when a young child is hungry, scared, tired, or just plain in need of a hug, his brain is hard-wired to try to get close to a parent in order to get his needs met.

It's not enough just to respond to your child, Siegel emphasizes-- it's how you respond. For example, let's suppose a child cries from her playpen and her father doesn't notice at first. When he does notice, he looks up from his newspaper, but decides to finish reading his article first. Then he gets up, changes her diaper, and puts her back in the playpen, but she continues to cry. He thinks she might be tired, so he puts her in the crib for a nap. After a half hour of more crying, he realizes she may be hungry and he gets a bottle and feeds her until she calms down.

From an attachment perspective, there's a problem here. True, the dad has attempted to respond to his daughter's needs, but he's misread her cues. "Repeated patterns like this teach the child that her father is not very available for meeting her needs," Siegel says. And the same could be said for a similar interaction with a first grader, or even a high schooler. When a child has a parent that is consistently inconsistent, or emotionally unavailable, they learn that they can not depend upon that parent.

On the other hand, if a child has a parent that consistently understands and responds to her needs, it leads to what attachment theory pioneer John Bowlby called “a secure base.” This experience of being understood and cared for is imprinted on the brain like grooves in a record, and the child uses that experience as a model for future relationships. It functions almost like a mental security blanket, which he can carry and refer to throughout his life.

Sounds pretty important, right? But according to Siegel, while the concept is well known to most psychologists, it hasn’t really made its way into the hands of regular parents. When parents hear the word “attachment”, many think of “attachment parenting”, a term coined by Dr. Bill Sears, Associate Clinical Professor of Pediatrics at the University of California, Irvine, School of Medicine and author of more than 30 books on childcare.

It’s hard work, but proponents say it’s worth it. According to Sears, attachment kids whine less, listen more, are more sensitive to their friends and their parents, are much more able and willing to share, show compassion, and develop confidence. That’s because they spend the first few months of their lives as “Velcro babies”, kept emotionally and physically close at all times.

Lysa Parker, one of the founders of Attachment Parenting International, which is based on Sears’ work, says that infancy presents a small window of opportunity in which to reap huge developmental rewards. “We know that the human infant is the least developed of all mammals and only 25% of their brain is developed at birth, so they’re dependent on their parents for their very survival,” Parker says. “What’s exciting to us is that neuroscience over the past years has enlightened us that it’s not nature versus nurture, it’s nature and nurture. The way the infant’s brain develops is directly correlated to attachment”. Parker says that “when a child is allowed to do what he’s born to do … clinging, sucking, crying, and other attachment forming behaviors, then his brain develops in a natural way. That’s what over sixty years of research keeps proving over and over again.”

Siegel says the neuroscience points to something else: the most robust predictor of a child’s “security of attachment” is actually the parents’ own self-understanding.  “Amazingly, the most important thing a parent can do, if you look at the research,” Siegel says, “is understand themselves. The research clearly shows that self- understanding and being open to your own feelings and the feelings of your child, is the best predictor of child attachment.”

At the heart of it all is the fact that we are social beings and that our brains are hard-wired to connect with others. The caregiving children receive, Siegel says, activates the brain in specific ways and that activation leads to the growth of explicit connections in the brain itself. In other words, the way you parent has a direct affect on the way in which your child's brain develops.

Love itself is not enough, Siegel says. Neither is proximity. And while we are a culture who loves to devour prescriptive parenting books, “no amount of reading will help” if you don’t internalize one key point: parents need to develop their own “mind-sight” (the ability to examine thoughts, feelings, perceptions, sensations, memories, beliefs, attitudes and intentions of others as well as ourselves) and that of their children.

“Parents often respond to their child’s behavior by focusing on the surface level of the experience and not the deeper level of the mind,” Siegel says, which is “the root of motivation and action. Talking with children about their thoughts, memories, and feelings provides them with the essential interpersonal experiences necessary for self-understanding and building their social skills.”

Is all this talk about attachment giving you a headache? The best news about the research, Siegel says, is that although there are lots of details, it all boils down to one simple goal for parents: take the time to examine and understand your own mind, and the mind of your child, and “you don’t have to worry about the details.” Be curious, open, accepting, and loving, and nothing else really matters. Here are a few tips on how to get started parenting in a more mindful way:

Be in the moment: “When we’re preoccupied with the past or worried about the future, we are physically present with our children, but mentally absent.  Children don’t need us to be fully available all the time, but they do need our presence during connecting interactions.” Translation: when you interact with your kids, give it your full attention. Don’t nod at your child’s latest art masterpiece as you talk on the cell phone, or listen to his concerns with half an ear.

Be consistent: When you respond to your child, do so “mindfully” and try to be just as sensitive and enthusiastic each time. For example, don’t jump up right away to soothe your crying child one time, and other times finish reading your newspaper first. Children who have inconsistent parenting grow up uncertain that they can depend upon the adult in their life, because sometimes they are dealt with compassionately and sometimes the adult is not there in the moment of need. They grow up anxious and insecure.

Be kind to yourself: Have compassion not just for others, but for yourself, too. “A loving stance toward yourself lets you know that whatever you’re going through is part of being human and you’re doing the best you can. When parents bring that to the table, that has an 85% rate of predicting whether a child will be securely attached or not,” Siegel says.

Enjoy your child: Sure, it may sound obvious, but with all the pressures of life, sometimes fun falls by the wayside. “Enjoying your child and sharing the awe of discovering what it means to be a person in a wondrous world is crucial for the development of your child’s positive sense of self,” Siegel says. So slow down and take your child in. Parents today feel strained to keep up with all the details of managing family schedules. “Children need to be enjoyed and valued, not managed.”

Communicate consciously: The way we communicate with our children has a profound impact on how they develop, Siegel says.  It can be incredibly difficult when you’re tired, hungry, disappointed, or angry, to communicate at your best…Our ability to have sensitive, reciprocal communication nurtures a child’s sense of security, and these trusting secure relationships help children do well in many areas of their lives. The nonverbal messages of eye contact, facial expression, tone of voice, posture, and the timing and intensity of response are also extremely important elements of communication. May reveal more than words. Being sensitive to nonverbal communication helps us to better understand our children and allows us to consider their point of view and relate with compassion.

Afraid you may have missed the boat when it comes to creating secure attachments for your child? The most wonderful thing about Siegel’s work is the fact that any time is a good time to get started. “You can even change your attachment status as an adult,” he says, “It’s never too late.”

Want to incorporate more closeness with your infant or young child? See our picks for baby-wearing.

Next Article: Social and Emotional Development
We enable strictly necessary cookies to give you the best possible experience on Education.com.Cookie policy