Back to School for the Shy Child 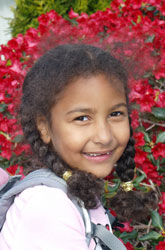 If you happen to have a school-age child who is shy, you are probably all too familiar with end-of-summer worries. Your child may be worrying about the new teacher, new kids, new classroom, and more than likely, you are spending your free time worrying about your child.

The good news is this: Parents can take concrete steps to help shy children. In fact, according to Dr. Robert Coplan, leading shyness researcher and professor of psychology at Carleton University in Canada, parents’ reactions to their shy children can greatly influence the effects of the shyness.

“The goal is never to change children into something they’re not,” Coplan says. “Shy children are probably never going to be the most outgoing exuberant people. We’re just trying to make sure their shyness doesn’t prevent them from doing the kinds of things they need and want to do as a child.”

And how parents respond to their children can make a big difference. Researchers refer to shyness as a personality trait, or, in very young children, a temperament. Dr. Sam Goldstein, a clinical professor of psychiatry at the University of Utah, defines temperament as “those qualities children bring to the world before parents have an opportunity to influence them.”

“When parents take the time to understand their child’s temperament, they become better parents,” Goldstein says. “The primary goal of parenting is to prepare children to become adults. If you insist that your child adjusts to things on your schedule, you’re going to have a shy child that’s also angry.”

Goldstein, who has coauthored a number of award-winning parenting books, including the recent Raising a Self-Disciplined Child, says many parents have a difficult time being patient with their shy children. “Think about your mindset in teaching a child to ride a bicycle,” Goldstein says. “It’s amazing the level of empathy and patience parents bring online. Yet when it comes to temperament—something high stakes—then slow isn’t fast enough.”

Goldstein explains that all of this is a result of parents making too much of their child’s shyness—worrying too much about what it might mean, what might be in store for their shy child down the road.

“But I would argue that being shy is not any great disadvantage for a child,” Goldstein says. “You have to ask yourself, ‘Does my child have the ability to manage life’s daily events at a level that’s expected by others?’” Goldstein says most shy children can participate in society an acceptable way; they just need support and guidance from their parents.

Unfortunately, though, according to Coplan, worrying parents often provide the wrong kind of support and guidance. Instinctively these parents want to protect their children, and they do this by removing them from stressful situations or by intervening and fixing the problem. “This is a very normal reaction,” Coplan says. “And it might make things better in the short term, but in the long term it can lead to the children not developing the skills they need to deal with stressful situations on their own.”

The better approach for parents to take is what Coplan refers to as a stair-step approach— helping children make small social goals and complete one at a time. Today you step into the store with me. Tomorrow you walk up to the counter with me. The next day you make eye contact with the person behind the counter. Etc. “This is an extreme example,” Coplan says, “but you can take any type of social goal and break it down that way into these sort of mini goals.”

What can parents do in the few weeks before school begins again? Goldstein says there are four important steps parents of shy children should take. And all four, he says, can be started before the first day of school.

And don’t forget the common sense steps: Make the beginning of school less stressful for your child. Visit with the new teacher and ask if your child can spend some time in the classroom helping out before the first day of class. Children thrive when they have specific tasks they have to perform—when they feel important. Having quality time to bond with the teacher before school begins will give your shy child more confidence.

Next Article: Separation Anxiety: How to Handle First Day Fears
We enable strictly necessary cookies to give you the best possible experience on Education.com.Cookie policy