Back to School for Kids with Special Needs 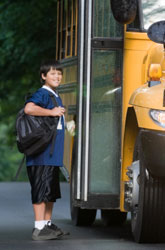 For lots of folks, there’s a happy rhythm to the last weeks of summer. Sure, there are still plenty of long, lazy days; but with a new school year around the corner, it’s also time for new notebooks, new outfits, and new adventures to come. A fresh start! What could be more exciting? Unless, of course, you’re a child with special needs. Whether they’re dealing with severe or even mild disabilities, these kids often find life chaotic, challenging, and anxiety provoking—even when they’re in familiar surroundings. To them, the “excitement” of a new year is anything but; it can feel like a long list of threats! Fortunately, says Rick Lavoie, M.Ed., author of It’s So Hard to Be Your Friend, parents can be a big help. And even if you have a “typically developing” child, don’t be surprised if Lavoie’s practical tips work just as well. After all, any child can worry about change. The key, he explains, is both simple and complex: to “prepare the situation for the child, and the child for the situation.” Here are his five practical tips:

Honor the child’s feelings.  As parents—and longtime veterans of Back to School—we know that generally, all will be well. But, says Lavoie, “The worst thing to say to a kid who’s anxious is, ‘don’t worry about it.’…any sort of transition tends to throw struggling kids.” Instead, says Lavoie, talk with kids gradually about school, a little at a time, “when the mood is right.” Keep at it, one small bit at a time, dealing matter of factly and positively with worries as they appear.

Prepare the school staff. “When elephants fight,” says Lavoie, quoting an old African proverb, “it’s the grass that gets hurt…when parents and teachers fight, the kids really suffer.” To get off to a solid start with new teachers, he recommends that parents create a short, readable “down and dirty” dossier, above and beyond a normal IEP plan. Start with your child’s strengths, but don’t hold back on challenges. How does your child act when she’s angry? Nervous? Sad? Most important, says Lavoie, list specific tips on what works when that happens. “I have never,” says Lavoie, “met a teacher or coach who doesn’t appreciate that.”

“Rehearse” when possible. During the weeks before school, says Lavoie, it’s especially helpful to involve kids in the process of getting ready. New school supplies? “Have your kid go shopping with you,” says Lavoie. New classrooms? “Go early—the week before school opens if possible—and take a walk. The more familiar a place is, the lower the anxiety.”

Get ready for lost stuff. Though struggling kids have widely varying issues, one that’s nearly universal, explains Lavoie, is a lack of internal structure. In practical terms, that means that kids with special needs frequently have a terrible time with prioritizing and organizing their time and their stuff. You’ll need to keep at it; often, says Lavoie, traditional organizing tools don’t work. One that he does recommend: a large family wall calendar on which you mark big family events, and mark off the progress of days.

Expect anxiety—and make a plan. No matter how loving and patient you are, says Lavoie, any child’s life has its stresses. Your best strategy he says, is to talk about it ahead of time. “Stress,” says Lavoie, “can be a very difficult feeling to describe,” but we all know that it can bring big trouble. Try making it concrete, says Lavoie, by encouraging your kid to pay attention to his internal “stress beaker”—a container that should never get so full that it overflows. Ask “how’s your beaker today?” and ask it often. You may be surprised how much the question alone can reduce a kid’s anxiety.

Finally, as school approaches, don’t be surprised if your child's excitement blends with some anxiety of your own. Pay good attention to your own “stress beaker,” advises Lavoie, and do what you can to send positive, upbeat messages to your child about the year ahead. Remember: teachers went into this business because they cared about kids, and they’re just as eager as you are for a great year ahead. After all, says Lavoie, “at the end of the day, we’re all in the same business. We’re here for the kids.”

Next Article: What's the Best Setting for Special Needs Students?
We enable strictly necessary cookies to give you the best possible experience on Education.com.Cookie policy