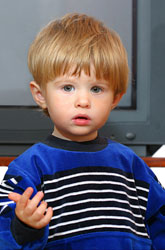 We know that kids shouldn’t watch too much TV. In fact, the American Academy of Pediatrics recommends no screen media for kids under two years old, and only an hour a day for kids over that age.

Yet, research shows that 40 percent of three-year-olds live in homes where the television in on most of the time, even if no one is watching it. Researchers have wondered for years what impact this background television has on a child’s development. Now, the results are in. According to new research from the University of Massachusetts, having a television on translates to less focused play and decreased parent-child interaction.

In the study, fifty children aged one-, two- and three-years-old were videotaped with one parent in a laboratory space resembling a family room, complete with armchair, table with magazines and newspapers, and a large toy chest filled with age-appropriate toys. For half of the hour, a television program selected by the adult played in the background. Parents could choose from a mix of sitcoms, cooking shows, game shows, and reality TV shows (Friends was by far the most popular, researchers said). During the other half hour, the television was turned off.

Turns out that in a majority of cases, as soon as the laugh track came on, both the quantity and quality of parents' interaction with their children decreased. “When the TV was on relative to when it was off, parents not only spoke less but interaction was affected, so they weren’t helping their child do things in play they couldn’t do on their own,” says Heather Kirkorian, one of the researchers on this study.

It is that very type of interaction that is so crucial to a child’s development, Kirkorian says. It’s called "scaffolding": when children play alone there is a limit to their abilities, but when playing with a competent other, they can engage in more sophisticated play. For example, your toddler may think banging two blocks together is the best thing since sliced bread. However, if you get down on the floor with him and show him how to use the blocks to build a coherent structure, you might just blow his mind. That’s scaffolding. If your preschooler is playing doctor with her stuffed animals, and you come in complaining of stomach problems, you’ve just upped the ante on the sophistication of her creative play—which many experts believe promotes problem solving skills and empathy.

The new research shows that many of those learning opportunities are lost in the presence of television. What Kirkorian says was most striking was that many parents weren’t even aware of their own distraction. “It’s not as if parents came into the lab and said, ‘Go play, I’m watching television.’ In fact, that only happened once. They really did try to ignore the television and play with their children,” she says, noting that one dad continued to respond to his child when the television went on, but the most he could get out were passive responses, such as “uh-huh.” The goes to show, says Kirkorian, that “TV is a very powerful distracter.”

Kirkorian stresses, however, that parents shouldn’t feel guilty every time they turn on the TV. A little background television won't hurt. “Where we want to raise the concern is where the TV is on almost all of the time,” she says. “It’s important that kids have quiet time to interact with objects in their environment. And they should have time every day to interact with parents.”

So, next time you’re out of parenting ideas and need a fun way to relax, don’t reach for the remote. Instead, try some of these activities with your child:

Next Article: Can TV Lead to ADHD?
We enable strictly necessary cookies to give you the best possible experience on Education.com.Cookie policy