7 Bad Boy Toys NOT to Buy Your Little Guy 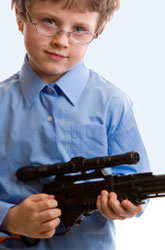 Whether your son is a nature-lover, a bookworm or a bona fide "bad" boy, toys being marketed to him seem to fall into one of a handful of categories: violence, sports or popular media, such as movies and TV shows.

Violence and sports are nothing new in these types of toys—in fact, the "boys" section of Toys 'R Us is littered with play weapons and hyper-muscled figurines, usually with a tie-in to a popular movie or TV show. All too often, these toys encourage aggressive behavior, discourage open-ended play and don't foster positive character traits typically associated with girls, such as compassion and cooperation. If you're looking to give your son a way to express himself and expand his imagination, think twice before picking up these "gendered" playthings at the toy store.

If you're looking for gender-neutral toys to get your kid's creative juices flowing, avoid overly violent, branded toys that can't be played with in multiple ways. Stuffed animals, blocks, LEGOs and art supplies are all great examples of gender-neutral, creative playthings.

In a society saturated with antiquated ideas about what little boys "should" play with, trying to nurture so-called "feminine" traits—such as compassion and cooperation—can feel like fighting an uphill battle. But remember that despite what anyone else thinks, your child's much better off with a parent who understands that raising a well-rounded, happy kid is more important than conforming to gender norms.