Log in with different email
For more assistance contact customer service
School and Academics
Reading for Beginners
Prepare for Battle: Battle of the Books!

Prepare for Battle: Battle of the Books! 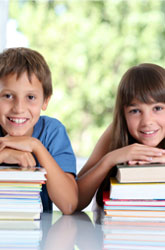 Who says reading has to be all peace and silence? Battle of the Books has turned reading into an exciting competition between students who love to the written word. Started by Dr. Steven Wentland, the non-profit Battle of the Books Association holds the academic event every year with the help of librarians or parent volunteers.

Why it started: Wentland’s goal was “to encourage students to read and become life-long learners” by having them answer questions about books assigned to their grade range—third to fifth grade, sixth to eighth, or high school. Who plays: There are usually four students on each team, sometimes with “alternate” team members in case a regular member has to miss a battle. After receiving the assigned book list, a team may decide to divide the books amongst the members to read.

How to prepare: A school that’s signed up for Battle of the Books will receive all the detailed rules, book lists, battle questions, procedures, point charts and resources for running a battle. After deciding what books to read, each child should carefully read and their assigned books and discuss them with the other members, considering what questions they may encounter during battle. Parents can help their children prepare, if they’ve read some of the books, by asking questions and having a trial run.

How it works: During game play, two teams play against each other, answering questions that the coordinator asks. Questions usually focus on identifying characters, key plot events or settings. Sometimes the team hears a description of a book and has to identify it within the list. The team has time to discuss, and then lets the assigned spokesperson announce their answer. If it’s correct, they earn points. If incorrect, the other team has a chance to “steal” the points if it can come up with the correct answer. Next, the second team is asked a question, and the process continues. When one team reaches a certain number of points, they win the battle.

When it’s held: State and regional battles take place in March or April, so school level battles usually happen in January or February.

How much it costs: The annual membership fee for the national group ranges from $30 to $45, which is sometimes taken out of a school’s PTA or fundraising account.

How to sign up: Look into a Battle of the Books Membership and find out if there is a statewide organization, since some states run them differently than the national chapter. Some battles are run by library associations, which will often send out free “starter kits” to new member schools.

Want to learn more? Head to the official Battle of the Books website to find out more about one of America's biggest reading incentive programs and start your battle today!

Next Article: 12 Ways to Foster a Love of Reading in Your Preschooler
We enable strictly necessary cookies to give you the best possible experience on Education.com.Cookie policy