Birth Order Traits: How to Parent Each Kid 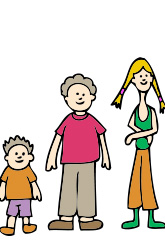 Your oldest child is an academic overachiever who generally looks for your approval. Your middle child is a laid-back athlete with a wide circle of friends who never seems to turn to you. Your youngest child is an adventurous soul who seems to have both parents wrapped around her little finger. When you look around, it seems like many families have similar configurations. Coincidence?

Research shows that people really do develop various characteristics based on their birth order—although there are definitely exceptions to the rule. According to Frank Sulloway, an adjunct psychology professor at the University of California/Berkeley, there are five reasons why birth order can have an impact on personality:

How to Approach Birth Order Traits

So how should understanding birth order trait tendencies affect your parenting techniques? Jack Agati, creator of the CD series “Why Do Kids Do the Things They Do,” gives parents four pieces of advice about how to use knowledge about birth order traits.

Consider Your Own Birth Order

Think about your own birth order, or your spouse’s, and consider how that might affect your relationship with each of your children. For example, a firstborn parent's needs and expectations might conflict with her firstborn child’s desire to do things his own way. As an adult, you have the ability to recognize that conflict and to respond in ways that allow your child to cultivate a healthy and unique sense of self.

Let Your Kids Be

Don’t try to change your children based on what you know about birth order. Instead of trying to steer your kid away from certain tendencies, tap into her strengths. Rather than looking for signs that your middle child is rebelling to deidentify from his A+ older sister and trying to nip it in the bud, nurture his unique talents and support him when he finds an interest that makes him feel confident in himself. Look at your children's differences as positive attributes that you can develop and encourage.

Once you understand the competitive instinct that birth order issues can cause, go out of your way to minimize competition between your children. Agati gives the example of a firstborn who runs to the dinner table and says, “I was here first!” Instead of playing into his need to be first in everything, tell him, “You’re all here. I don’t care who was first.”

Praise the process—and the positive character traits—rather than the product. Instead of praising a child for a flawless report card or for making three goals in a soccer game, praise him for his patience, teamwork, or sense of responsibility. If your six-year-old and your three-year-old both bring you their drawings, don’t say how they’re such artists; that cheapens the compliment for the older child and is an obvious lie to the younger child, as both know that the younger child’s drawing cannot compete. Instead, say, “You know what I like about yours? It shows creativity and imagination. And yours shows great patience and attention to detail.” That way, you're valuing each child without referring to a standard that might fuel competitiveness.

Be conscious of how you might be reinforcing birth-order beliefs, and try to avoid doing so. For example, your picture albums are probably full of pictures of your firstborn, and you made a huge deal out of every milestone that this child passed. As much as possible, try to allow your younger children to see you making that “huge deal” out of them as well.

Go Out of the Box

If your kids do show tendencies towards these birth order roles, encourage them to grow and pursue their interests without worrying about what their siblings are good at. “The worst thing we can do with any birth order information is to pigeonhole our kids and people into thinking that because they’re the middle child, for example, that’s the way they have to be. This eliminates the concept of free will, the fact that they can make choices about how they choose to act.” Even if your eldest is a strong reader, allow your younger children to develop their own love of reading, too. If your second child is the star of the football team, allow the other children to join a team even if they don’t seem to be as gifted. And if your youngest is a drama queen, don’t squash your older children’s dreams of becoming actors and actresses. Let each child become who he or she wants to be, regardless of birth order.

Help your kids recognize what makes them unique and resist the urge to compare them to their siblings. The purpose of being aware of birth order traits is not to scapegoat kids' behavior or to see how they measure up, but to know what you can to squash any insecurities your kids might have related to developing their individuality uninhibited by their siblings. Whether your kids' personalities line up with these tendencies or not, knowing potential hurdles they might face as they're growing up with other siblings will give you the tools you need to make sure they all thrive.