Should Your Child Consider A Historically Black College? 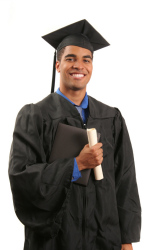 Every college has its claim to fame—and when researching a college that's right for your child, all these rankings can get confusing. There's one group of institutions that receives annual recognition: Historically Black Colleges and Universities (HBCU).

Every fall, the White House hosts a national conference to honor the 105 colleges and universities in the United States created to educate black students. In the late 19th century, colleges for black students were literally started from scratch; in some cases classes were held in box cars and church basements. Yet, while these institutions have faced financial and social hardship, they have graduated some our nation's greatest heroes.

Robert Franklin, President of Morehouse College in Atlanta, GA., says his school continues to uphold a culture of service that fostered Martin Luther King Jr. and others like him. According to a recent study by the National Center for Education Statistics, HBCU represents only about 3% of the more than 4,000 colleges and universities in the United States, but each year they graduate 20 percent of all black students who earn undergraduate degrees. This is despite the challenges, says Franklin, to keep black colleges affordable and to compete for the best and brightest with majority institutions.

Franklin says part of the descent on Washington next week will be to lobby for federal aid, so that students from low-income families can still afford to go to college. “We are trying to challenge elected officials who may have lost sight of their ethical commitment to expand the gateway to higher education,” he says.

HBCU have also upheld a tradition of welcoming students of all races, says Ivory Nelson, President of Lincoln College near Philadelphia, PA. Lincoln College is the first school of higher learning for young black men, founded in 1854. The school's first graduating class was multi-racial, and has been ever since.

But, is an HBCU right for your child? Well, it all depends on what you're looking for, according to Marybeth Gasman, Ph.D, an assistant professor at the University of Pennsylvania Graduate School of Education. She says if you're looking for schools with huge endowments and powerhouse sports teams, these may not be the schools for you. But, she says her research has uncovered specific needs these schools get right:

Diverse campus and faculty. Gasman says black students don't have to worry about subtle and overt forms of racism. And non-black students are given the opportunity to experience a diverse environment.

Nurturing environment. Nelson says at HBCU you're a name, not a number. “Many of the students we serve have been given the short stick before they even arrive at our door. We give them the programs and services they need to succeed. All you have to do is bring yourself,” he says.

Opportunities in the graduate and professional field. Gasman says one of her most recent studies showed that 50 percent of all black women in graduate science programs come from one of two small black colleges, Bennett College in Greensboro, NC and Spelman College in Atlanta, GA. She says this is just one example of the success HBCU have had in spurring students onto post-graduate work.

If your child is considering an HBCU, Gasman says make sure the school's graduation rate is at or above 39 percent and that it's financial viability. She suggests checking the HBCU Alumni Network web site to see how alumni feel about their institutions. Go to: www.hbcunetwork.com

Next Article: When the Letter Arrives: What to Do About College Decisions
We enable strictly necessary cookies to give you the best possible experience on Education.com.Cookie policy