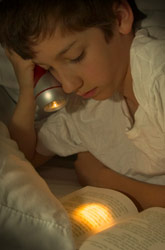 For tweens and young teens, going away to sleep-away camp is often the first real step toward independence. Making new friends, learning new skills, and breaking away from old routines may wind up being the highlight of an adolescent’s summer.

Even the most experienced camper, however, sometimes finds herself feeling a little homesick, especially during down-time. That’s when a few engrossing, entertaining books come in handy as both a distraction and something to share with cabin mates.

Series and Sequels Some of the best books to take to camp for both boys and girls are series, because once you get hooked on an author, set of characters, and storyline in the first of a series, you’ll be eager to start to start the next book. If your tween or teen has a favorite author who is coming out with a new book over the summer, you might want to order it ahead of time online and then give it to your teen when he or she is packing up for camp. Your camper will automatically have something to look forward to on that first rainy afternoon or quiet time.

Smiles to Go by Jerry Spinelli (Harper Collins, 2003) Star-gazing, pizza-eating, skateboarding science geek, Will is a teen whose world is suddenly tipped on its side, and he realizes that life is all about not knowing what comes next.

A Series of Unfortunate Events by Lemony Snicket (Harper Collins, 2006) This popular series, books, one through 13, are available in paperback and full of mishaps and dark humor about a wacky set of adventuresome orphans.

Hatchet (Aladdin, 2006), Brian’s Return (Laurel Leaf, 2001) and the Francis Tucket (Yearling, 2006) series by Gary Paulsen These books combine history and adventure with teen-aged protagonists, and are especially popular among boys.

Inkheart (Scholastic Chicken House, 2003) and The Thief Lord (Chicken House, 2006) series by Cornelia Funke These books invoke supernatural powers and will delight fantasy fans and all readers who like an exhilarating plot and larger-than-life characters.

Books of Ember by Jeanne DePrau (Yearling, 2008) The stories take place in the dark city of Ember, a spooky place with no natural light and a dwindling population.

Hoot by Carl Hiassen (Yearling, 2006) In this adventure story, teenagers band together to save the natural world.

Series for Teen Girls They may be the equivalent of “chick lit” for teens, but most girls enjoy reading series about the social and love lives of fictitious girls. Books in these series are somewhat formulaic, but for a girl missing home and best friends, there’s a certain comfort in knowing how the plot will unfold and the certainty of a happy ending. Popular books in this category include:

Second Helpings by Megan McCafferty (Three Rivers Press, 2003) A funny, candid sequel to Sloppy First, the story follows the adventures of misfit, Jessica, the summer before her senior year of high school while she’s enrolled at a super-competitive academic camp in New Jersey.

This Lullaby, by Sarah Dessen (Speak, 2004) High school graduate, Remy, is a cynical heroine whose thoughts on love and romance are tempered by her romance-writer mother’s engagement to a car dealer.

Sisterhood of the Traveling Pants series by Ann Brashares (Delacorte Books for Young Readers, 2008) The saga of four girls and a magical pair of jeans that fit them all perfectly continues. Forever in Blue is the fourth and final in the series celebrating one last, glorious summer.

Tiger Eyes by Judy Blume (Piper Books, 2006) The latest book by a perennial author. This is a teen murder mystery with a strong, believable plot.

Just for the Guys

Boys who love a good survival story will probably get into books that focus on adventure.

Endurance by Alfred Lansing (Basic Books, 1999) The true story of an expedition in the South Pole in 1914.

Ghost Soldiers by Hampton Sides (Anchor, 2002) This novel, set in the Philippines during World War II, offers both action and history.

Flyboys and Flags of Our Fathers by James Bradley (Little Brown and Company, 2006) Excellent and true war stories that focus on American soldiers and pilots who fought in the Pacific during World War II.

The Hunger Games series by Suzanne Collins (Scholastic Press, 2008) Gripping sci-fi adventure, action and romance novels rolled into one that will have your teen on the edge of his bunk.

Great Adult Reads for Teens Most high school kids have assigned reading over the summer, but many are ready to delve into well-written, age-appropriate books for adults.

The Curious Incident of the Dog in the Night-Time by Mark Haddon. (Vintage Illustrated, 2004) A 15-year-old autistic boy plays Sherlock Holmes in a quirky and poignant story.

Marley and Me: Life and Love with the World’s Worst Dog by John Grogan. (Harper, 2008) A heartwarming story about a crazily misbehaved golden retriever and the owners who love him.

The Hitchhiker’s Guide to the Galaxy by Douglas Adams. (De Ray, 2002) Arthur Dent travels the galaxy on a quest to save the universe.

Before your camper takes off, consider visiting your local library where most librarians are happy to offer tips on the best books for camp, as long as you promise they’ll be returned without a dip in the lake!

Next Article: An Invite to the Antarctic!
We enable strictly necessary cookies to give you the best possible experience on Education.com.Cookie policy