Breakfast Is a Teen's Best Friend 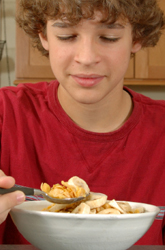 Turns out grandma was right, breakfast really is the most important meal of the day. Especially if you’re a teen. Especially if you’re a teen with a weight problem. According to a recent study by the University of Minnesota called “Project EAT (Eating Among Teens),” adolescents who eat breakfast every day consume a healthier diet in general and are more physically active than teens who skip the morning meal.

With childhood and teen obesity rates at an alarming all-time high, there can’t be too much discussion around how to keep our kids healthy. According to Project EAT, 57% of adolescent females and 33% of adolescent males often use ill-advised weight-control methods, such as skipping meals. A frustrated, overweight teen may think he’s doing himself a favor by foregoing a burst of early morning calories, but all he’s really doing is slowing down what may already be a sluggish metabolism, not to mention shortchanging his ability to be focused and alert in class.

But are all breakfasts created equal? According to one of the study's authors, Mark Pereira, PhD, the answer to that question is a definite “No.” “Breakfast is an opportunity for kids to have a healthful meal, rich in nutrients,” states Pereira. And if you think eating a daily, well-balanced breakfast is a habit you can insist your teens follow while you warm up the ol’ Pop Tart, think again. According to Pereira, modeling this healthful behavior is one of the best ways to get your adolescent into the routine of eating a nutritious, satisfying breakfast. “Parents can shop for healthful breakfast choices at the grocery store – give kids choices. Parents can role model, sit down to eat breakfast with the kids if possible, or at least take along a healthful, portable breakfast.”

So break out the raisins, bananas, sunflower seeds, and honey for an early morning oatmeal sundae! Scramble up some eggs and toast a whole wheat English Muffin for a nutritious, tasty version of that icky fast food breakfast sandwich! At the very least, grab a baggie full of granola and dried fruit before racing out the door to start your busy day. Your teen, and her body, will thank you for it.

Here’s a fun and easy recipe for homemade cereal bars:

Prepare a 9x13 baking pan with nonstick spray. Combine raisins, chopped nuts, and cereal in a large bowl, set aside. Boil sugar and corn syrup for 1 minute. Add honey and peanut butter to sugar/corn syrup mixture and stir until everything is melted. Pour the melted mixture over the cereal, raisins, and nuts. Stir until well coated. Gently press the mixture into your baking pan and let cool. Once cool and hardened, cut the mixture into bars or squares. Bon appetit!

Next Article: Do's and Don'ts for Dining Out with Kids
We enable strictly necessary cookies to give you the best possible experience on Education.com.Cookie policy