Log in with different email
For more assistance contact customer service
Outside the Classroom
Music and Children
Can Mozart Really Make Your Child Smarter? 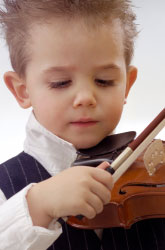 Does musical genius start in the womb? The makers of “Baby Mozart” would argue yes. It seems that every classical musician has a hand in making baby toys these days. Every store greets you with a different product for playing Beethoven, Bach, or Hayden, and famous tunes stream out of most children’s musical instruments with the push of a button.

This fairly widespread trend of incorporating classical music in baby toys and products can all be blamed on “The Mozart Effect.” In modern parlance, The Mozart Effect stems from the theory that listening to music, especially of the classical genre, improves intelligence. This concept, believed to have been around for centuries, has apparently been proven by dozens of studies conducted by those who, surprise surprise, would wholeheartedly promote the boom in classical toys.

So what is the truth? The first studies began 1993, when Frances Rauscher, Gordon Shaw, and Katherine Ky published an article in Nature magazine about their research at the University of California at Irvine. In the study, college students were asked to listen to a Mozart sonata, a relaxation tape, and then silence, for ten minutes each. Directly afterward, the subjects were given a test on spatial reasoning. The results were astounding. Students scored much higher on the tests after listening to the Mozart than after the relaxation tape or nothing at all.

Naturally, the results took popular media by storm, with the Boston Globe coining “The Mozart Effect.” After all, if we could all improve our IQs by cranking up the Chopin, why wouldn’t we? And why not improve our kids’ chances by pumping classical music into the nursery as well?

But the road to Mensa is not so easily attained. What the original study didn’t seem to account for were the long-term impacts of music on a child’s brain. According to Dr. Rauscher, there were three limitations to the study that weren’t taken into account:

Evidence in favor of The Mozart Study was faltering. Since then, a recent study in Australia, published in Music Perception: An Interdisciplinary Journal in 2006, looked at the effects of pop music on 136 fifth graders. The process was similar to that of the original 1993 study, and concluded no evidence of The  Mozart Effect in the children.

In 2010, a team at the University of Vienna ran a meta-analysis of 40 international studies and concluded that there was no proof of The Mozart Effect. While this doesn't prove that there are no positive long-term benefits to music listening, it does mean that wafting The Nutcracker Suite into your infant’s crib can't guarantee admission into an Ivy League college.

But don’t throw the baby out with the musical bathwater! Dr. Rauscher still concedes that research has demonstrated that playing a musical instrument can lead to improved spatial reasoning. What has not been proven is that passively listening to music, especially at a young age, has any long term effects on cognition. And if you still spring for the trumpet that blasts “What A Wonderful World”, well,  we won’t blame you. Because that toy is plain cool, and you don’t need a scientific study to prove it.

Next Article: Instrumental Learning: Get Your Kid into Classical Music
We enable strictly necessary cookies to give you the best possible experience on Education.com.Cookie policy