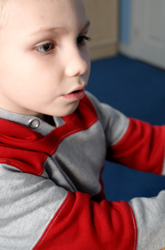 It’s no secret that autism is on the rise, but what's being done about it?  Researchers have invested time and money to figure out ways to reach children on the autism spectrum.  And a few have come up with a new approach: virtual reality.

Virtual Reality is a realistic simulation of an environment by a computer system.  It’s technology taking you to a scene that feels and looks real.  And for some children with autism, it’s can be a safe way to learn to interact with others.

“Virtual reality allows children with autism spectrum disorder to practice all-important reciprocal social interaction skills in a safe environment,” explains Justine Cassell, Ph.D, director of the Center for Technology and Social Behavior at Northwestern University.  “Virtual characters are more predictable than real children, and sometimes more patient, and so children with ASD may find it easier to engage in the kinds of interactions that we ultimately hope they will have in the real world with their real peers.”

Cassell isn’t the only researcher who sees potential in this idea.  Dorothy Strickland, Ph.D., is the president of Virtual Reality Aids.  Her research led her to believe that virtual reality could be a useful tool for teaching safety skills to children with autism.

“This project started over ten years ago with a study designed to determine whether virtual reality could help two children with autism learn the beginning skills of street crossing,” says Strickland. “The children were placed in a virtual world and practiced correctly observing and responding to the virtual world situations. The results indicated that these children could and did accept learning in a virtual world.”

Wondering how it works? According to Cassell, there are two modes of interaction in virtual learning systems for autistic children. In one, a child interacts directly with a virtual peer. In another, the virtual peer is controlled by the child. In the future, Cassell hopes that virtual reality can go even further in helping autistic children.  “Virtual peers of this sort can help to assess the exact nature of the social deficits that may be experienced by children with ASD which, in turn, may allow us to design better and more targeted interventions.”

Although Strickland’s company does sell one a program, called "My Yard", that teaches children to stay safely in their backyard, most of the technology for virtual reality isn’t available to the general public yet. “For the moment, our virtual peers require a fair amount of equipment,” explains Cassell.  “We hope that one day they will run on anybody's home computer.  When (and if) that's the case, they will be accessible to all children everywhere.”