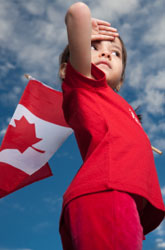 Americans might be surprised to see how Canadian parents interact with their kids up in the "True North strong and free." On the surface, Canucks seem fairly similar to Yankees, but when you drill down the fundamentals, the two have different value systems and, therefore, different parenting styles. Besides the fact that Canadians are probably more likely to sign their kids up for hockey than Little League, check out differences in the way Canadians parent their tots. You might be surprised at what's most important on the "stuff to teach my kid" Canadian checklist.

Politeness and courtesy. Walk the streets of any metropolitan Canadian city and most Americans will make the same two observations: Even the larger cities look spotless and everyone is just so darn polite. You can thank Canadian parents for that nicety when you visit Toronto or Vancouver. Canadians are sticklers for common courtesy, manners and simply being nice. When compared to American parents, 47 percent of Canadians consider unselfishness a necessary attribute for children, while only 38 percent of Americans think it's a must-have. Other manners Canadians are obsessed with? Taking shoes off in the house and never saying "Uh huh" instead of "You're welcome."

Want to try? Make manners more of a priority by modeling polite behavior and allowing your children to see how you talk and interact with others. That might mean it's time to tone down the road rage and remember to give kudos to that guy holding the door open for you.

Multicultural upbringing. Growing up in certain parts of Canada probably means you have neighbors from every corner of the globe. While Americans call the effect the "melting pot," Canadians refer to their communities as "mosaics." Most cultures retain their food, art, habits and social customs even after living in Canada for years, which means Canadian children are exposed to a variety of people and culture. That's probably why Canadians rate tolerance as number one on their list of necessary parenting values.

Want to try? Find ways to teach your child about other cultures. Art exhibits, street fairs and performances are often sponsored by cultural groups and are the perfect way to teach your little one to appreciate other walks of life.

Leniency in parenting. When compared to other cultures, Canadians are among the most lenient in the world. A study published in a 2010 issue of Journal of Adolescence found that Canadians were pretty easygoing when it came to rules. Michael Claes, the author of the study, told ScienceDaily that "Canadian mothers and fathers were seen as less punitive, less coercive and more tolerant than French and Italian mothers." There's no telling whether this type of parenting actually results in better-behaved kids, but we know it at least results in more relaxed mamas.

Want to try? Learn to pick your battles with your child so he really pays attention when it matters. For instance, maybe you give in to letting him stay up for an extra half hour, but walk a hard line when it comes to homework.

Environmental consciousness. When in Canadian cities, it's not uncommon to see entire families heading for a bike ride to the farmer's market or strolling along the waterfront. In urban areas, using public transit is often taught at a young age, with small children tagging along with parents. And when compared to the United States, those values ring true and have an effect: Cities like Vancouver, Toronto and Calgary all rank high on the green index for North American cities. As an added bonus, Canadian kids enjoy a lower rate of obesity than American children—it must be all of that bike riding!

Want to try? Start making small changes in your home to cultivate an appreciation for the Earth. Recycling, planting a garden and walking instead of driving aren't huge lifestyle changes, but they teach a respect for the environment that Canadian children know and love.

Teaching independence. Canadians value personal independence more than their southern neighbors do. While it's hard to generalize, Canucks are more than happy to allow their children to explore learning, hobbies and even religion. "Canadian parents value a democratic conception of education that promotes independence and negotiation," Claes notes in his landmark study. Parents typically urge their children to behave autonomously, learn what they like and develop their own beliefs.

Want to try? Give your kid a little leeway when it comes to making decisions. You can choose the biggies for now, but your child gains independence and confidence from picking his outfits, choosing his snacks and planning activities.

Bottom line? Canadians aren't drastically different than Americans in the way they raise their brood. Still, there are a few key ways that Canadian mamas and papas raise their children that Yankees could learn from and put into practice for calmer, more respectful kids.