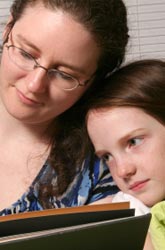 Over 45 years after MLK’s “I Have a Dream Speech,” personal stories of the Civil Rights Movement are still coming to light—and so many great, relatively recent books give voice to those who experienced the indignities of segregation and the victories of the Civil Rights Movement as children. These six books offer unique and captivating perspectives into the turbulence of 1950s and 1960s Black America.

Nobody Gonna Turn Me 'Round: Stories and Songs of the Civil Rights Movement, written by Doreen Rappaport and illustrated by Shane W. Evans (Candlewick, 2008) Nobody Gonna Turn Me 'Round completes Rappaport’s black history trilogy (other titles include No More! and Free at Last). The history lesson this book offers is certainly wide-ranging—Rappaport includes a Civil Rights timeline in the appendix—but never dry. Drawn heavily from primary sources, her chronology of one of America’s most turbulent periods tells the whole story by examining both the tragedies, like the murder of Emmitt Till, and the triumphs, like the passage of the 1965 Voting Rights Bill, without sentimentalizing either. For grades 4-7.

Grandmama’s Pride, written by Becky Birtha and illustrated by Colin Bootman (Albert Whitman & Company, 2005) Birtha’s book was a Society of Children's Book Writers and Illustrators 2005 Golden Kite Honor Book. Grandmama’s Pride is all the more affecting for the quiet nobility with which it portrays the adults in six-year-old Sarah Marie’s world: “The three of them sit in the back of the bus, because, as Mama says, it is the best seat.”  Bootman’s rich illustrations put a real face on the long fight for civil rights. For grades 2-4.

The School is Not White! A True Story of the Civil Rights Movement, written by Doreen Rappaport and illustrated by Curtis James (Hyperion, 2005) Years after 1954’s Brown vs. Board of Education decision, schools in Mississippi were still segregated. So it wasn’t until 1965 that the children of Matthew and Mae Bertha Carter, Mississippi sharecroppers, integrated their school in Drew, Mississippi. It is this true story that Rappaport recounts in The School is Not White! The Carter children face myriad setbacks in their education, but, as their spirited mother reminds them, “the school is not white.” For grades 2-5.

Freedom on the Menu: The Greensboro Sit-Ins, written by Carole Boston Weatherford and illustrated by Jerome Lagarrigue (Puffin 2007) “How long before the sit-ins are over, Mama?” “Till folks get what they want,” is Mama’s reply in this book about the famous North Carolina sit-ins. The young protagonist, Connie, watches as Dr. King galvanizes the movement in Greensboro—a movement that becomes very personal to Connie when her brothers and sister join the NAACP and refuse one day to get up from the lunch counter that denies them service. The somewhat murky illustrations are evocative of a darker time in American history. For grades 1-4.

Freedom’s Children: Young Civil Rights Activists Tell Their Own Stories, written by Ellen S. Levine (Putnam Juvenile, 2000) Historians generally focus on adult accounts of the Civil Rights Movement, like the story of Rosa Parks—but the account of teenager Claudette Colvin, whose refusal to give up her bus seat preceded Parks’ by nine months, is a reminder that children and young adults felt the impact of these momentous time as well. Levine interviews 29 others who lived through the struggle as young people and she tells their stories with candor and empathy. If any book can be simultaneously heartbreaking and inspiring, it is Levine’s Freedom’s Children. For grades 4-7.

These stories—the fictitious, the fresh, and the familiar—are all imbued with the fierce hope of the Civil Rights Movement and rousing in their own right.

Next Article: Classic Picture Books Your Preschooler Will Love
We enable strictly necessary cookies to give you the best possible experience on Education.com.Cookie policy