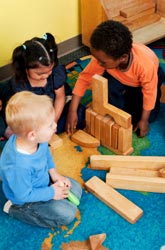 With the economic downturn, cutbacks at schools this year are a given. Parents can expect to see less paper, fewer pencils—and maybe, warns one advocacy group, less playtime for younger students. At the heart of the controversy is the Common Core State Standards Initiative. Could this new push for standards take play out of the equation for young children?

Thumbs up for standards…

A state-led partnership orchestrated by the National Governors Association Center for Best Practices and the Council of Chief State School Officers, the Common Core State Standards Initiative aims to create clear educational standards in English and math. Adoption of the core standards is voluntary on a state-by-state basis, and several states—Ohio, Michigan and Georgia among them—have already signed on. Teachers, subject-area experts and administrators teamed up to create the new framework, which took its cues from high-performing educational models worldwide, effective state standards and public feedback.

The initiative seeks not to nationalize education, but to create consistently rigorous educational frameworks across the U.S. In a recent Common Core Standards Initiative release, West Virginia Superintendent of Schools Steven L. Paine, Ph.D. said, “Having consistent standards across the states means that all of our children are going to be prepared for work and college readiness regardless of zip code, regardless of background or disability or even language proficiency.” American Federation of Teachers President Randi Weingarten assured that the common core standards were “not a fad” and that they were a necessary response to global change: “We need to be both thoughtful and deliberative about ensuring that our children are prepared for this world.”

Even the kindergarten core standards reflect some of the rigor championed by the initiative’s supporters—prior to first grade, English standards recommend that students should be able to (with prompting) make a connection between text and illustrations, identify and answer questions about unfamiliar words in a text, and detect and generate rhyming words. Math standards require students to count by tens to 100, add and subtract within 10, and use simple shapes to form bigger, more complex shapes (two triangles to form a square, for example). Proponents assert that these standards are research-driven, guided by the National Assessment of Educational Progress reading and writing frameworks and the Trends in International Mathematics and Science Study.

What’s not to love about the new standards? A lot, claims the Alliance for Childhood, especially for younger children. The mission of the Alliance, a diverse partnership of top academics, behavioral health specialists, teachers and other advocates for children, is to endorse “policies and practices that support children’s healthy development, love of learning, and joy in living.” They are particularly concerned about the kindergarten core standards, which they argue in a recent press release, “fly in the face of well-established knowledge about how young children learn” and are based in “guesswork.” Of the skills included in the standards, critics argue that many are grade-inappropriate and undependable indicators of future academic progress. Says a recent Alliance statement, “There is simply no definitive research showing that certain skills . . . if mastered in kindergarten will lead to later success in school.”

Especially problematic for Alliance members is that the “more than 90” kindergarten standards will require more hours of instruction—and probably more standardized tests. The Alliance points to research which shows that standardized tests are unreliable indicators of success in children under the age of eight, and are even detrimental to learning. Testing creates a vicious cycle for the average kindergarten classroom. With teachers already on guard following Race to the Top’s and No Child Left Behind’s joint emphasis on performance data, time normally devoted to play could be supplanted by skill and drill. Opponents worry that such practices would diminish students’ exposure to hands-on learning. The Alliance quotes Edward Miller, senior researcher in early childhood education: “[The standards] focus on discrete content knowledge and ignore the well-documented need for an integrated approach.”

In spite of their many reservations, Alliance members did applaud core standards writers for their validation of play as a teaching tool; however, members are clear in their recommendation that play be made a primary, not secondary, aspect of early childhood education whether or not states are adopting the standards. Troubled about play and hands-on learning losing their places in the classroom? Contact your child’s school and speak up. The Alliance promotes a “public outcry” in favor of play-based education. “Parents, in particular,” says Alliance director Joan Almon, “need to express loudly the concerns that many are feeling.”