Parental Conflict and Its Effects on Children 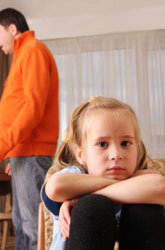 Fill in the blank: Kids who experience conflict in the home are more likely to…

In today’s world, parents know to keep their children safe from psychological harm. We may wish that we could control the books they read, the music they listen to, and the TV shows they watch, solely because we fear the negative influence that media can have on their development. But surprisingly enough, many parents don’t see themselves and their relationships as external influences on children. In truth, children who experience parental conflict are often at a higher risk for a number of psychological and behavioral problems.

This is especially the case when it comes to couples who clash in parenting style. Research from Baylor College of Medicine in Houston, by Dr. James H. Bray, shows that behavioral problems are more likely to occur in children whose parents have differing opinions on parenting style. For example, if one parent is very strict and the other lets the kids do anything they want, it can lead to disagreements as well as confusion on the part of the children. But even when disagreements aren’t over parenting issues, excessive parental conflict still hurts children.

According to Rabbi Yisroel Roll, a licensed child psychotherapist, there are three main negative responses that children have towards parental conflict:

Secondly, children may blame themselves for the conflict. In a child’s mind, the world revolves around their actions. When they hear their parents arguing, they may be convinced that it is their fault even if it has nothing at all to do with them. When the conflict does revolve around discipline issues, the child can feel even guiltier.

The third possible response that children might have to parental conflict is to act out. Rabbi Roll maintains that if a parent wants a misbehaving or unmotivated child to come to a therapy session, he must see the child and parents together for a family session first. “The child is often reacting to what’s going on between the parents,” says Rabbi Roll. “And sometimes, this may sound shocking, but children act up on purpose in order to get their parents to get their act together. They know psychologically that the parents are not on the same page, and they want to force their parents to try to deal with them. Once you see better parental communication, more observable warmth and respect and love between the parents, the children simply calm down.”

Surprisingly, there’s actually an advantage to all this. Rabbi Roll explains that unless people are extremely motivated towards self-growth, the only real way to strengthen a marriage is through conflict resolution.

In addition, it’s healthy for children to watch parents communicate with each other to settle an argument, assuming that it’s done in a caring and effective way.

Any of these behaviors sound familiar? Here are some steps you can take to reduce disagreements with your partner: