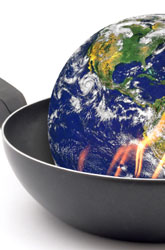 Picture this: your kid's in science class, and a heated debate sparks over the legitimacy of global warming. Will your child speak up, or shrink down to avoid the controversial spotlight?

Earlier this year Senate Bill 893, dubbed the "monkey bill" by critics, became law in Tennessee. Named for the historic trial of biology teacher John Scopes, the bill is designed to "help students understand, analyze, critique, and review in an objective manner the scientific strengths and scientific weaknesses of existing scientific theories," including cloning, biological evolution, and global warming.

The bill's proponents say it's just a way to help students be critical of all information, while opponents (including The American Association for the Advancement of Science and the National Association of Biology Teachers) have called it a backhanded effort to preach contentious theories like creationism to students.

Regardless of your personal stance, this bill represents a larger issue that you're bound to face as a parent: helping your kids navigate controversial science subjects. From debates about global warming to creationism vs. evolution, science class today can be less about facts, and more about which opinion is the "right" one. As a parent, how can your be sure your kid comes out with what's important: an education? Use the tips below to help your child successfully navigate sticky subjects in the classroom:

Since you can't be there to guide her through difficult classroom discussions, do the next best thing and prepare your child for controversial science subjects with the tips above. The next time her teacher introduces a topic like evolution, genetic modification, or cloning, you can rest easy knowing your kid's prepared for an intelligent, articulate discussion, and that she's ready to do what's most important: learn!