Log in with different email
For more assistance contact customer service
School and Academics
Helping Your Child with Writing
From Cursive to Cursor: The Death of Handwriting

From Cursive to Cursor: The Death of Handwriting 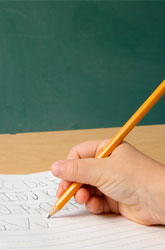 You might have called it longhand, or Spencerian script, or Palmer penmanship. Whatever you remember it as, the graceful loops and whirls of your childhood may be a thing of the past for today’s grade schoolers. Can’t believe that your kid might know script only as a font style? Believe it: in the ever-changing and increasingly technocentric world of public education, penmanship is passé.

When the SAT required a handwritten essay section a few years ago, many thought that cursive might see a revival, but by 2007 85% of test-takers were responding to their prompts in print. If cursive is seen as irrelevant in high-stakes testing, our data-driven schools seem likely to abandon it altogether within the next few years.

The reasons for this are logical. Cursive served a practical need once—over one hundred years ago, when personal correspondence was conducted largely in a “fair hand”. Originally, the recipient paid the postal fees when a letter was sent. Though this changed with the advent of the postage stamp, paper and postage were expensive commodities for many. Cursive proved a way to defray costs: people could write one page of cursive, turn the page 90 degrees, and then continue writing their letter on the same page. Cross writing would not have been possible with block manuscript.

But in a world in which everything from personal correspondence to job applications are chiefly computerized, the need for such a skill isn’t as pressing. Many school districts have abandoned cursive in favor of teaching basic computer literacy skills, a move which, in the eyes of many, better prepares kids for life in the technologically competitive 21st century. Teaching cursive as a discrete skill takes time away from teaching students how to communicate meaningfully, they argue. Admittedly, research that rationalizes cursive as an integral part of elementary curriculum is slim, and studies as early as 1966 were already calling it a redundant “tradition”.

But there may be something to be said for keeping cursive. Studies have shown a grader bias against papers with messy handwriting, even though their content may be the same as those written neatly. The upswoop and italics of cursive teach fine motor skills, proponents say. Zaner-Bloser, a publisher of writing, vocabulary, spelling and handwriting programs, stands behind the method so firmly that they sponsor an annual handwriting contest. “Learners who become independent and fluent in writing manuscript and cursive letters enter a world of endless opportunities,” their Handwriting Within the Context of Literacy research review boasts.

Ethna Reid of Reid School in Salt Lake City would agree—her school almost swept the Zaner-Bloser competition at every grade level. Reid cites the impersonality of text messaging and other computerized forms of communication as a reason to teach the penmanship on which her school prides itself. Could abandoning cursive render us unable to read it in the future? Older generations, many of whom save heirloom handwritten documents for their grandchildren and great-grandchildren, worry that this may be the case.

There’s no doubt that teaching good, legible handwriting skills, whether through print or cursive, improves kids’ ability to construct and convey thought. Still, the prevailing view is that teaching cursive in addition to print distracts schools from that larger goal. This opinion would come as no surprise to Randall R. Wallace, who heard cursive’s death knell over ten years ago. In his article “Simplifying Handwriting Instruction for the 21st century”, he writes, “It is evident that teaching two forms of handwriting has outlived its functional value in society and takes up space in a curriculum that is clearly overcrowded.” With Microsoft Word dotting i’s and crossing t’s for us, John Hancock’s John Hancock may be a relic of the ages.

Next Article: The Four Components of the Language Arts Curriculum
We enable strictly necessary cookies to give you the best possible experience on Education.com.Cookie policy