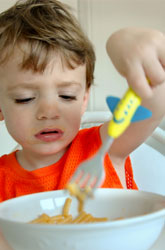 You've tried everything from slowly introducing new foods to making healthier versions of kid-friendly grub, and still your child refuses to eat anything but a limited selection of approved dishes. Attempts at ignoring the problem, pleading and even sending her to bed hungry have failed. Often, a parent in this situation feels guilty for "making" their child such a picky eater. But what if a larger issue—not your parenting skills—is to blame?

Picky eating habits for kids are so universal that they're among the top five concerns parents bring to pediatricians. Researchers now know that kids' eating habits are determined by several factors, including early experiences, motor problems and genetics. Learn more about the causes of picky eating, as well as some solutions.

Most kids outgrow picky eating in mid-childhood, but early intervention is key to solving eating disorders. Lifelong picky eaters face serious health consequences because of their limited diets. By helping your child work through the root of her eating issues, she'll feel more at ease in food-centered social situations and will work toward experiencing the joy of sharing a scrumptious meal with friends and family.