Educate Yourself About Food Labeling 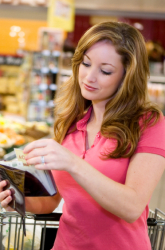 Kraft has “Sensible Solution.” PepsiCo has “Smart Spot.” The American Heart Association licenses its “heart-check” symbol. General Mills displays one or more of 26 different logos on what it calls a “Goodness Corner” on some of its packages. But the nonprofit Center for Science in the Public Interest (CSPI) says consumers can easily be confused or misled by supposedly healthy labeling, since the various programs have different aims and use inconsistent nutrition criteria.

The CSPI has formally petitioned the Food and Drug Administration (FDA) to do something about it. They want the government agency to design a national set of easy-to-use symbols that will help consumers quickly identify healthier foods.

The symbol would be in addition to the current Nutritional Facts label. And many countries around the world are already doing it. The United Kingdom uses a system of green, yellow, and red dots to rank fats, sugar, and salt as low, medium, or high. The Swedish government has a system featuring a green keyhole-shaped symbol to identify the healthiest choices within a food category. CSPI says the FDA should review those and other programs and solicit comments from the public about how a similar system should be structured here.

“The supermarket is teeming with competing 'healthy food' symbols that run the gamut from highly helpful to fatally flawed,” said CSPI executive director Michael F. Jacobson. “Not everyone has the time or knowledge to scrutinize the Nutrition Facts labels or to decode the symbols Kraft, PepsiCo, General Mills, or other companies happen to be using.”

One of the best labeling systems, CSPI says, was developed by the Hannaford supermarket chain in the Northeast, which awards products in its stores either zero, one, two, or three stars based on nutrition, and displays them alongside the price of the item. General Mills' Chocolate Lucky Charms, for instance, receives no stars (it has too much sugar) even though it bears the Heart Association's heart-check mark. Frito-Lay's Munchies Kid Mix (containing Cap'n Crunch cereal, mini pretzels, Cheetos, popcorn, and candy-coated chocolate pieces) bears PepsiCo's “Smart Spot,” the criteria for which are overly generous when it comes to salt in snack foods. Similarly, General Mills ignores its products' worst nutrition attributes and only considers the redeeming ones when it awards its products one or more of its 26 symbols.

The Institute of Medicine has concluded that the “array of categories, icons, and other graphics, as well as the different standards employed by these companies may introduce some confusion, particularly for young consumers,” but it's yet to do anything about it. With new faces in Congress, things may change. Senator Tom Harkin (D-IA), chairman of the Senate Agriculture Committee, is on the bus. He's stated that if the FDA doesn't respond to the CSPI's petition, he'll push legislative action himself.

Next Article: Eat Local!
We enable strictly necessary cookies to give you the best possible experience on Education.com.Cookie policy