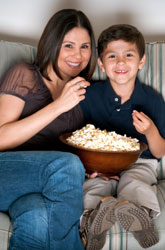 Can’t stomach another family movie night featuring Hanna Montana or Clone Troopers? Screen one of these family-friendly movies and your kids won’t even realize they’re learning something new while they munch popcorn on the sofa. All are available on Netflix.com or Blockbuster.com, or your local video store or library (at no cost!).

Bring the World Home with a World Language Movie

Travel to another country without so much as stepping foot into O’Hare Airport: Rent a foreign flick and host a world movie night! Even beginning readers will be able to catch the subtitles on the movies recommended below.

Step up the festivities a bit by accompanying each movie with snacks or treats from the featured country. Cookbooks such as Kids Around the World Celebrate!: The Best Feasts and Festivals by Lynda Jones and The Kids Multicultural Cookbook by Deanna Cook feature recipes for a wide array of tasty snacks, main dishes and desserts enjoyed in countries around the world that can be enjoyed right in your living room.

Pop in a movie and prepare for a night of family fun and learning—for kids and parents alike!

Next Article: SOS: 5 Parenting Movies to the Rescue
We enable strictly necessary cookies to give you the best possible experience on Education.com.Cookie policy